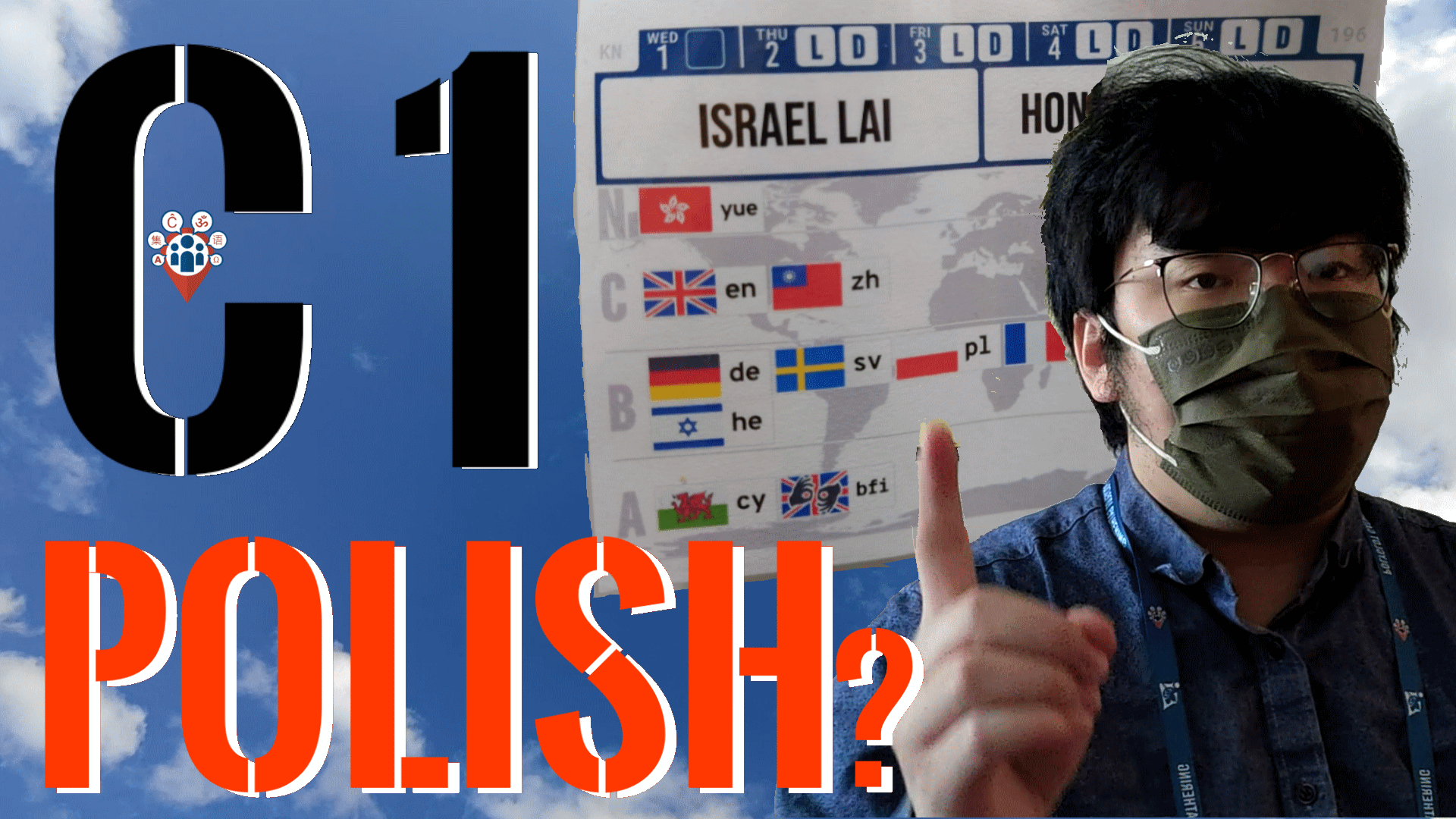 One year ago, I set a goal to learn Polish to fluency within one year.

It’s the first day of the Polyglot Gathering 2022! In addition to many interesting talks, what else is happening?

Today is the first proper day of the Polyglot Gathering. There are plenty of talks and workshops, but from my past experience, I’ve decided that I won’t be trying too hard to go to talks. Because if I had to choose, I prefer socialising and chatting to listening to talks. Because the talks will be online later, as in they’ll record them, and at the worst it’ll take half a year, and they’ll post them on YouTube.

We have a much bigger corpus. We have millions of words in the corpus.

Another word is yanuka, which means child, kid, which is related to the word yankut, childhood, and also related to girsa deyanuka.

Perhaps inspired by the online Gatherings, this year, they set up several tables each hour for us to practise specific languages.

Hello, we are sitting at a language table and speaking in Polish — Yes, speaking Polish.

All of us have met on the internet.

I don’t know it Jiří remembers me — I do

I also remember you!

I know Tomek and Zuza, because…How many times have we spoken? Could be dozens.

I feel like… were you (at the Gathering) in Bratislava?

I did go to Bratislava, but did we meet?

I think we had lunch together once, but I haven’t…But afterwards we’ve met three times online, and you also came to our university club for a (virtual) talk. So that’s already four times, and now is the fifth.

Now the question is: How many Poles are there here? At this table, because usually half of everyone are Poles.

One, two, three, four, five, five is the minimum. Could be more — There’s always this phenomenon.

Yes, such a phenomenon.

Because we’re in Poland, there are Poles everywhere, and I have plenty of Polish friends, so I keep chatting with them.

I feel like within one day, in this immersive environment, I’ve improved a lot!

Before, I only got to speak for like an hour every week, but now I’m speaking nonstop and drinking with people at night.

So I asked them what they think my Polish is, and they all say…

I shouldn’t put it at B, which is intermediate level; they say in their own opinion, I should put it on C.

Remember when I made a video saying I wanted to reach a C level before the Polyglot Gathering this year? My goal was to do a talk in Polish at this Gathering.

But in the end, because I had too much work at the university, I ended up giving up on my talk.

But well, does this count as having reached my goal?

Turns out it isn’t just one person who has their birthday today. Happy birthday dear…???

And Islam, traditionally, is called 回教, the Hui religion. It’s still widely used in places which are untouched by modern PRC culture. So in Taiwan, in Hong Kong, in Macau, in Malaysia and Singapore, you would refer to Islam as 回教. Whereas in China, it’s become 伊斯蘭教, which is closer to the original.

There’s a book swapping desk here, always open. Let’s wait and see in the coming days what books will come and go.

Which one of the following languages has a neuter grammatical gender? Romanian, Japanese, Turkish, or Persian?

A language represents a culture, of course we have always these language fans bring a bit of their own culture to share with everyone.

Tonight is the first concert, but I’d rather sit outside and listen, to let my ears rest for a bit…