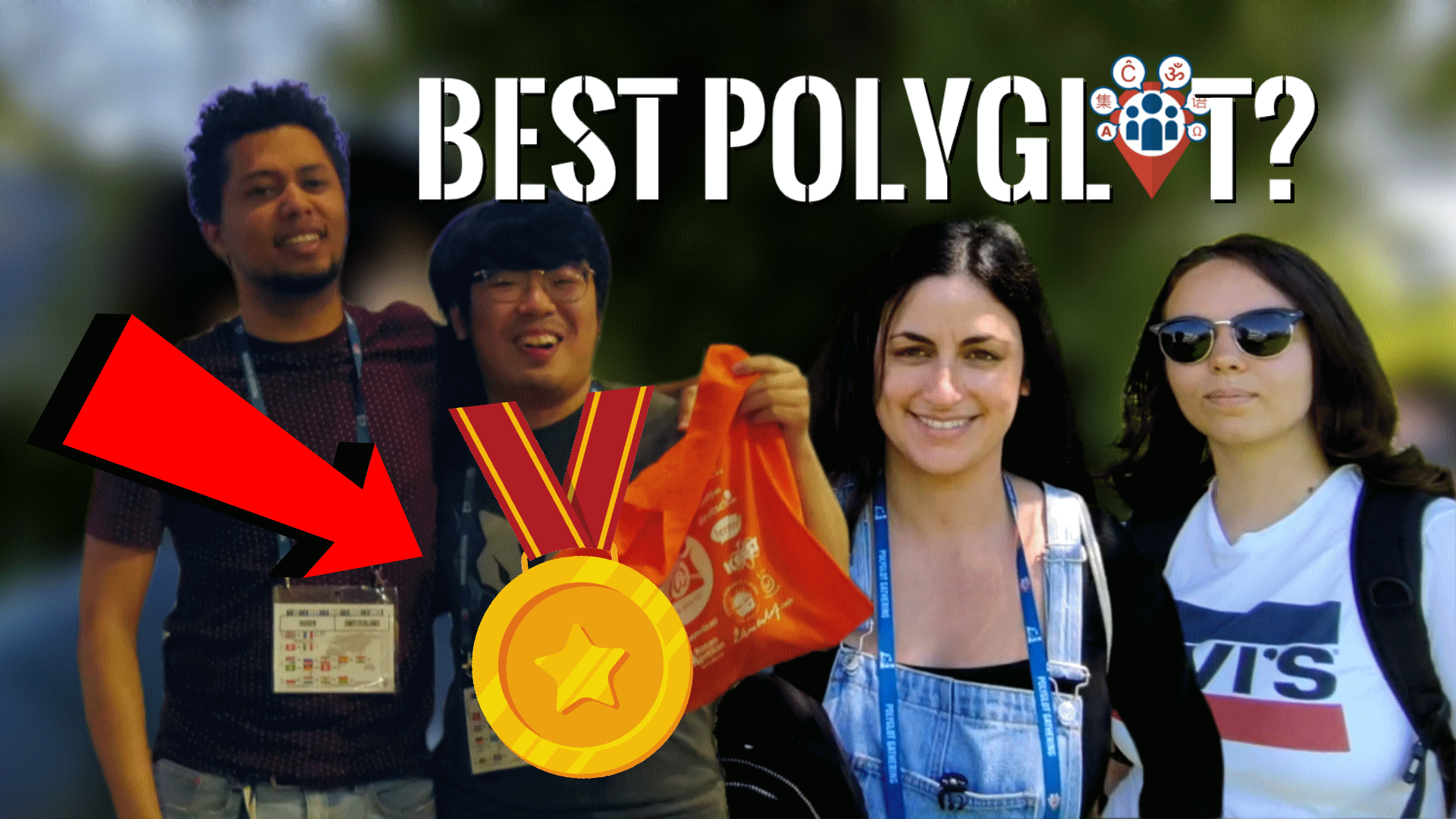 How did we fall in love with Finnish grammar?

How long did I know these friends before meeting them?

Am I the ultimate polyglot?

How do you win the polyglot quiz?

Most importantly…where will the next Polyglot Gathering be held? Poland? Germany?

Let’s find out… Stay tuned (and TURN ON SUBTITLES) for the multilingual conversations I’ll have with my new friends!

So I started worrying. Is this really going to keep spreading? And I jinxed it, it really happened. So I’m now very uneasy. It’s like it’s infectious.

In the early morning, let’s take a look at what’s new at the book swapping desk! Quite some unexpected language materials.

I’ve put on this shirt specifically for the group photo. It’s like a sea of red.

Right, yesterday I said that my mic keeps malfunctioning. It’s now getting worse, because I accidentally put it into my back pocket, and then sat on it, so…It’s no longer a clip mic, but rather just a mic. So I can use it like the type of mic for stages.

This sounds quite good, makes more sense than the thing before.

The talks this year have more interactive elements. Besides a Q&A space for both in-person and online viewers, we can even vote to decide what questions get answered!

Yeah, at the same time as I’m filming, more experienced vloggers are also hard at work.

If you put endings to words…The most unforgettable part of this day must be the Finnish workshop. Because after the explanations, we were given plenty of opportunities and toys, to fully use our imagination.

Do you remember the first day I was here, there was a trip? We were driven around by a Slovak. What’s special about him? Apart from his good looks, it’s that he doesn’t wear shoes. He walks everywhere bare-footed, so his feet are black all over.

On the second day, I saw a second person without shoes just like him. So I started worrying. Is this trend going to keep spreading? And I jinxed it, it really happened. Exponentially many people started walking without shoes. So I’m now very uneasy. It’s like it’s infectious.

For me, the best part was meeting many people who have the same passion. And in my everyday life, I don’t get the opportunity to meet so many people from the whole world. And the atmosphere is very friendly and open. I liked that most.

I think many people mainly come from Europe, but there are also people from America etc.

Yeah, the most people come from Europe, I think.

Yeah, there are many Singaporeans.

For me, the thing that I liked best is obviously meeting new people and practising languages. Besides, the atmosphere is very nice. So what can I say? Good event, you all should come next time!

So now let’s listen to the language. So basic greetings in Korean. As I said, hello is 안녕 in between friends.

As we get closer to the end, if you also think that the event is amazing, remember the subscribe to watch my upcoming Kraków day trip episode and epilogue! You can also click the link below and buy me a cuppa. Thanks!

We’re now at the final three quizzes of the last night.What a surprise that me and my friend won two of the three quizzes! However, because I was way too excited, I didn’t get any video.

And of course, big thank you to the participants of the Polyglot Gathering 2022. As much as we don’t want it to end, we’re now at the conclusion, the one thing we’re most concerned about must be where we’re going next year. But before that…there was also a fun survey, where we can see how diverse this group of polyglots really are. And next, we have a (Polish) grammar question…

What? How many cases?

So where are we going next year anyway?.

It’s been almost half a year since then…But…We still have no idea when, or where it will be held.