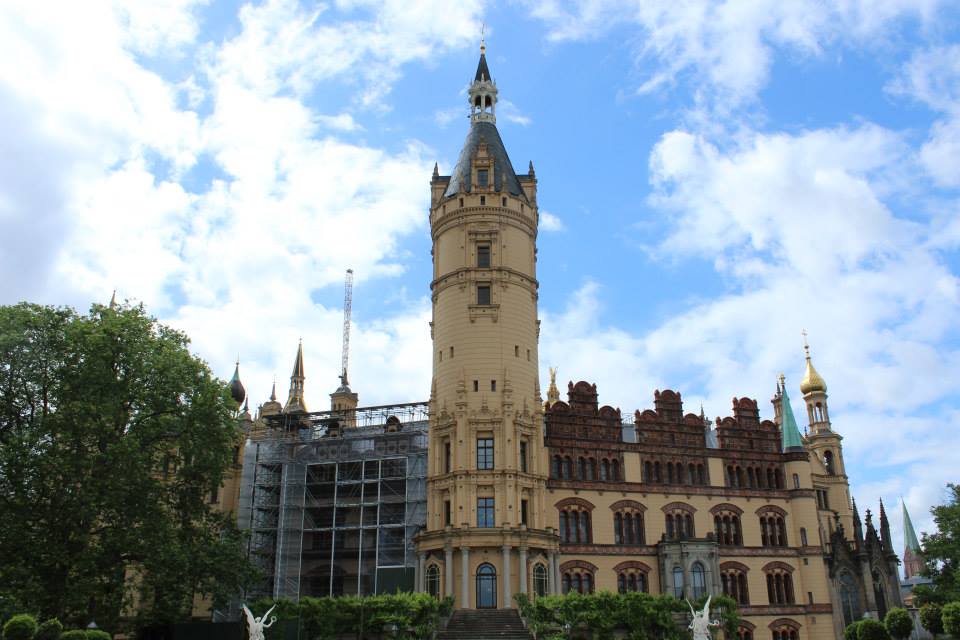 Whoa! It’s been quite some time. First I’ll have to apologise for the infrequent posting – I’m around three quarters through my whole journey, and travelling for such a time span (quite long for me at this stage!) is quite tiring, with all the spontaneous planning necessary on the way. Indeed my solo travelling style is almost planned last-minute: a friend of mine calls that ‘controlled indeterminacy’ (fancy name). I’ve also had unstable Internet connections all the way, especially on trains. Plus my monthly mobile data limit is 300MB! Anyway rest assured that the stuff I write is all fresh, even though I post it weeks later. Because I’m the kind of person who records everything I see and every thought I have right on the spot. So without further ado, onto day 4!

My original plan was 3 days in Hamburg, but I ended up with an overhaul: a friend of mine had been living in Schwerin for around two weeks at the time with the family of a friend of hers. (Sounds a bit complicated but not really.) Schwerin is a small town around one hour by train to the east of Hamburg. Not quite a big name, considering I’d never heard of it either, but it actually turned out to be a really nice place to stay, or just take a look and spend a nice few hours, since it’s home to the so-called Neuschwanstein of the North, despite the myriad of castles throughout Germany.

I got up quite early – perhaps too early – and off I went, with all my belongings on my back. First the train to the main station, then simply 1 hour on the regional train brought me to the town. DB (Deutsche Bahn)’s app did all the timing work for me. On the way, it was interesting to notice a bunch of Germans all reading either a book, a document or a newspaper. Perhaps it was a coincidence, but nonetheless a large contrast to my screen-addicted society. Regional trains like this one are comparatively simple in terms of facilities, and naturally, it stops quite often too. There was a bit of delay (yes, despite ‘German punctuality’), but reasonable. I met up with my friend and we walked towards downtown. I carried my backpack and violin all along, because I’m a cheapskate and didn’t want to pay for lockers. It turned out to be a real chore, for a first-timer like me, or from another perspective, a good back training for me.

In small towns like Schwerin, one of the things you might notice is the language usage: compared to metropolises like Hamburg, people (as expected) don’t speak English as well, and on the streets e.g. on signs you’ll generally see only German. German is the default language to communicate with tourists (even though I look Asian and clearly not German), and they’ll stick to it unless you absolutely cannot understand. It’s heaven when you want to practise your language skills like I do, but beware if you don’t. 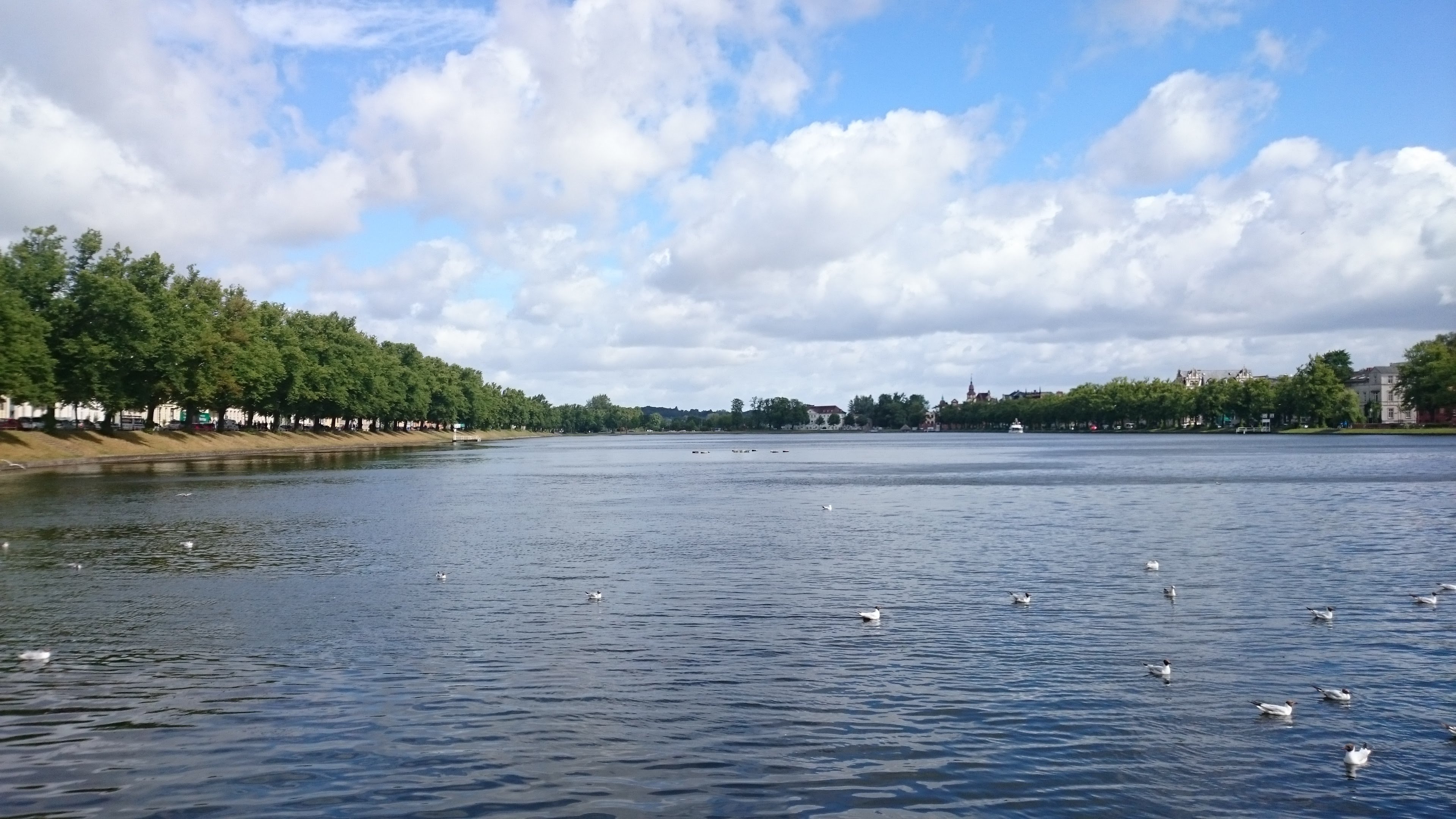 This town’s selling point is definitely the scenery. I was told that it’s surrounded by 7 lakes of various sizes (Google says 12), and it wasn’t hard to run into one. We took a look at the smallest one, which is populated by swans and ducks alike; it was a surprise to hear that this lake also hosts the Chinese Dragon Boat Festival, run by the thriving local Chinese community just beside it.

We then walked across the city, past the theater, towards the National Museum (Staatliches Museum Schwerin). It consists of classical paintings by painters such as Germans and Dutch. There is also a special exhibition, which was unfortunately in preparation while I was there.

With a detour, we turned back into the city centre for lunch at a ‘local’ restaurant, which functions also as a Fleischerei (meat specialty, with lots of Wurst, among others) and a bakery. The prices were not particularly attractive, but the Currywurst I had delivers quality German-style delicacy with value for money, and a slice of chocolate mousse cake certainly wouldn’t hurt. After lunch we also stepped into a nearby church. It was covered in white, unlike most churches, and the reverb/echo inside was overwhelming. Acoustic fans have to go in and sing a song. 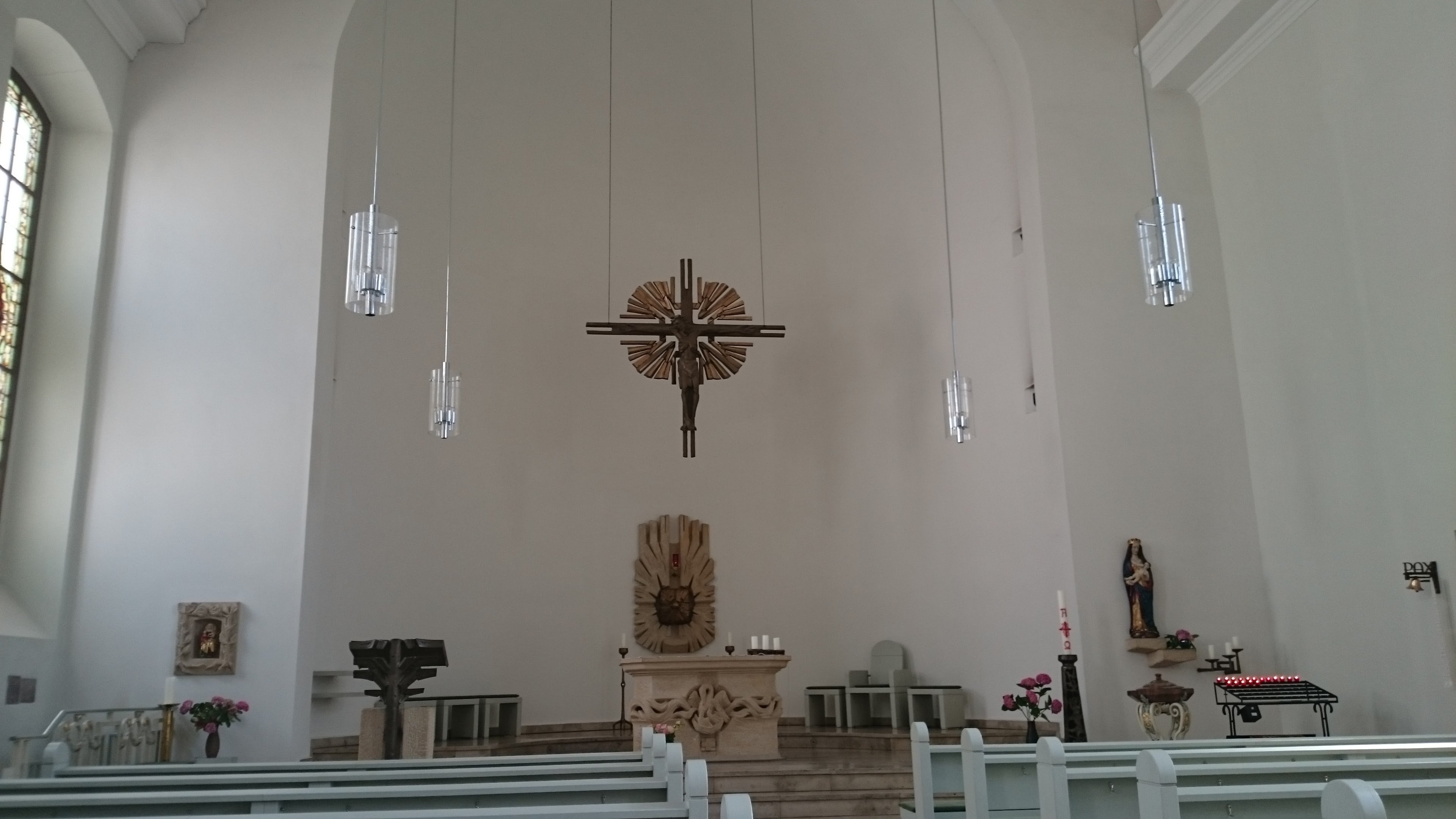 Of course, the highlight of the trip has to be the well-known castle (Schloss Schwerin), which is basically the highlight of the town as well. It is surrounded by a sizeable lake that shimmered as the unusually strong wind pushed along. With a reasonable price you can look around inside the castle – there are exhibitions of all sorts, including a collection of weapons near the end of the tour, but let’s be honest here: you’ll want to look at the rooms more than these. One particularly memorable feature was the ‘whisper chair’, with which pairs of opposite genders could sit together, looking in opposite directions, and whisper to each other without their eyes meeting. (OK that wasn’t a good explanation.) While I was there, a German kindergarten group came and enjoyed all kinds of activities on the floor, fascinated by the throne above all.

But don’t pick up your belongings from the cloakroom yet after visiting the castle – the surrounding garden has a lot to offer. One side of it was unfortunately under construction (restoration?) though, and will be hopefully open soon. In the spacious gardens you can admire statues and hop through grass tunnels, bathe in sunlight and play a character in a painting – surprisingly picturesque! Special thanks to the weather – there were dark clouds throughout the day, but no rain at all (just strong wind). 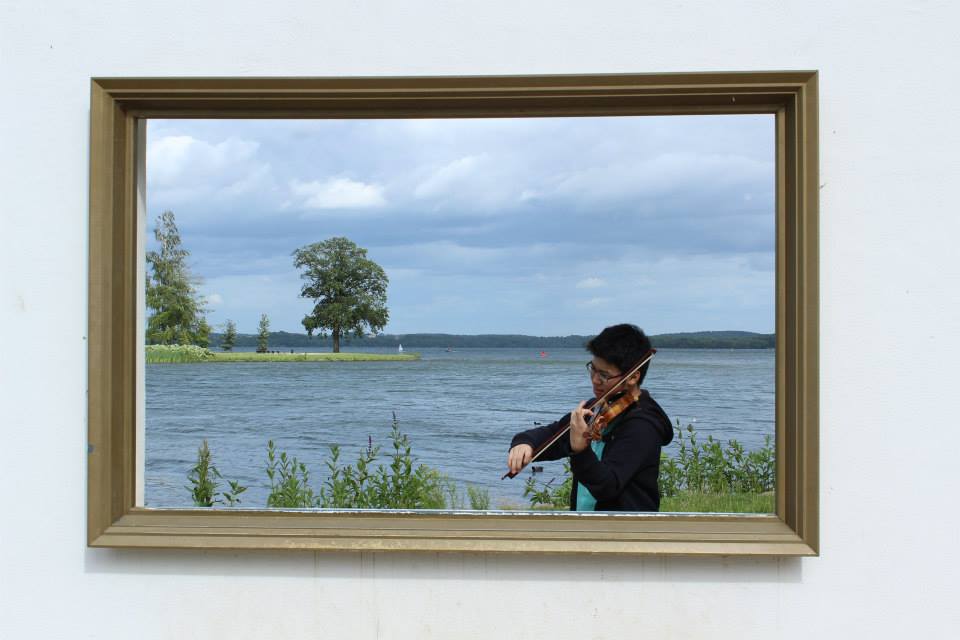 I was back to the central station a bit after 5, just in time to catch the train back to Hamburg. With the experience in the morning, I had to confirm whether there would be a delay, since I’d have to change trains to Frankfurt in 7 minutes – of course they couldn’t confirm either. Thankfully the delay was insignificant, and after one stop I was in Hamburg, then on another train to Frankfurt. Halfway through I started a conversation with a German architect who lives in Frankfurt but takes lessons occasionally in the north. With my currently level, I still listened way more than I spoke, but hey, I’m glad I understood as he talked to me about buildings in Frankfurt’s outskirts, as well as giving me travel recommendations for the city. I told myself not to forget the apple wine!

Off the train, I walked towards my first ever CouchSurfing host’s place, almost right opposite the station. Due to some misunderstanding it took me a long wait, standing on the street in front of drunken passers-by, but I was there finally, just before midnight. He was an amateur musician trained in the Ukrainian (akin to Russian) system, i.e. quite proficient; though he was also knowledgeable in many fields! We played our musical compositions and had some food and chat, and that ends my day for now.

Frankfurt is where almost everyone comes but no-one stays, and is sometimes rumoured to be a worthless place for tourists – but is it? I’m sure I’ll soon find out 🙂