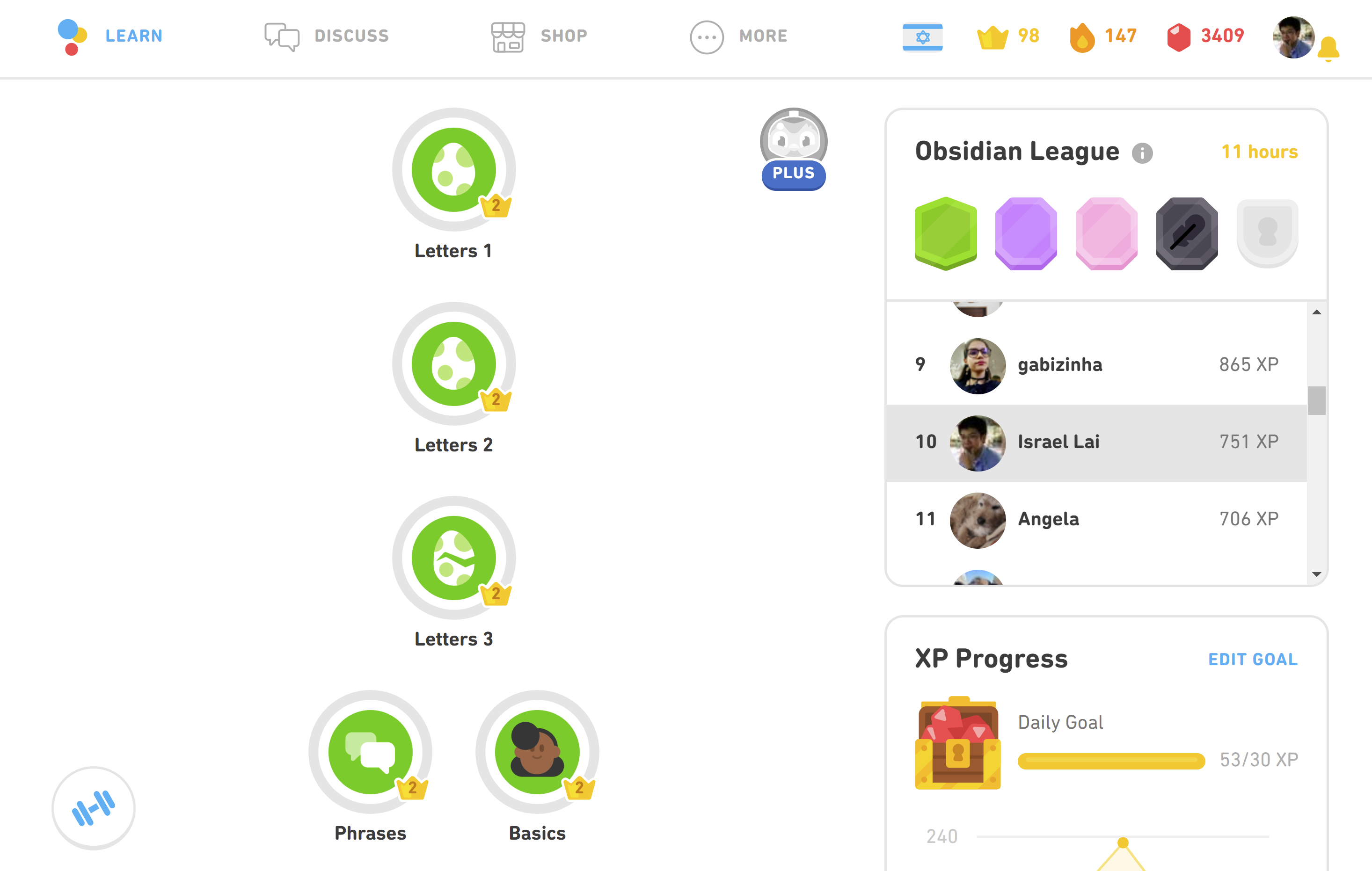 Duolingo is probably the most well-known language learning website out there.

It’s fun, it’s stress-free (most of the time), and it helps build a regular habit. Oh, and it’s free.

But as we mentioned on the podcast, Duolingo’s quality can vary greatly from course to course. While the gamified learning system is based on the same principles and exercises, the course design, lesson content, types of exercises, audio, etc., totally depend on each course’s creators.

For example, the ‘biggest’ languages have gained crazy hi-tech features like AI chatbots and learning from stories, while smaller languages…aren’t as lucky.

I’ll assume you know how Duolingo basically works: you slowly make your way through a tree of skills, do lessons with translation exercises, and it sends daily notifications to threaten you into practise. If you want to know my thought on the site as a whole, come join my livestream! In this review, I’m focusing on the design of the Modern Hebrew course.

What is Duolingo most known for? Wacky, fantastical sentences.

Well, not in Duolingo Hebrew. At least, not to the same extent.

This course consists mainly of sentences that I could imagine using in real life, including descriptions and responses to complex situations that could actually happen. For example, ‘she will know that we lost her bike’.

In terms of the progression in skills and vocabulary, I would say this course is typical for a Duolingo course. As in, it mostly teaches you what you need at the right level. (I’ve seen worse, for example, the Welsh course.) The vocabulary builds up and sometimes reappear in later lessons — though I thought it could do so more often.

There’s only the odd word or topic that feels distinctly out of place. For instance, you learn about geometry (squares, trapeziums???) way earlier than you would expect to.

And sometimes, a skill could be too dense. For example, you learn verbs in the present tense bit by bit, but when it comes to the future tense, they’re all lumped into one skill. And trust me, there’s a lot to memorise in the Hebrew future tense. So you might feel a bit overwhelmed at times.

The lessons in the Hebrew course consist of the basic exercises that are available on Duolingo: translation (en-he, he-en) and dictation. No matching/multiple choice, no pictures, no recording yourself, etc.

In both kinds of exercises, you have the option to type out your answer, or use the word bank, i.e. pick out words from a list provided. I highly recommend against using it, as it doesn’t force your brain to recall the necessary words. Oftentimes, you recognise a word from the word bank and assume you know it, when in fact you’re incapable of actively using the word. I’d rather get it wrong and learn from my mistake.

In my opinion, while the lack of variety can be a tiny bit monotonous, the course is well-equipped with the core of the Duolingo method: two-way translation. From that perspective, this is not a downside.

The most common complaint that I see in the discussions is audio.

The root of the problem is that there isn’t good text-to-speech software for Hebrew, which can accurately read aloud a sentence.

In Hebrew, one written word often has several pronunciations, so it is hard for the computer to choose the right one. For example, Clozemaster Hebrew mispronounces words so often that I turned off the feature.

Shouldn’t that be a good thing? Indeed, as you can get used to hearing natural, realistic pronunciations and inflections. But at the same time, there are two main problems.

First, the audio is occasionally missing. As the course consists of hundreds, maybe even thousands, of sentences, not every sentence has a recording. And with the way this language works, if you can’t listen to a sentence, you’ll often have to guess how words are pronounced. When in doubt, I consult pealim, find the matching meaning of the word, and learn its pronunciation. Which is a lot of work.

Nevertheless, this has improved over the years. When I started a few years ago, around a third of the sentences didn’t have a recording, but nowadays, this only happens once in a while.

The second problem is the speed of the audio. The course designers decided that the native speaker recordings would all be at native speaker speed. With other Duolingo courses (with computer-generated recordings), the website can slow it down, or pronounce each word separately. With this course, all you get is the one recording.

I see a lot of comments complaining that it is impossible to hear every word, especially in dictation exercises. People complain that the words are slurred.

I beg to differ — while the audio is fast, every sound is pronounced very clearly. And I actually prefer it this way. As Olly Richards explains, it is better to listen repeatedly and force your ears to get used to the fast audio, than to lie to yourself that you understood it, when in fact you simply listened word by word and moved on.

Most importantly, it’s refreshing to hear these realistic recordings, after spending some time with other courses with computer voices.

The Duolingo Hebrew course has attracted a great community of learners over the years it’s been available.

I am particularly grateful to the users that painstakingly typed out the niqqud (pronunciation guide) and the romanisation of almost every sentence in the comments. When I encounter a sentence with no audio, they really save me a lot of time with the dictionary.

But as in every online community, you get some users making dumb complaints, for example about how the English translation isn’t the most natural word to use in American English. There are also some fanatics that swarm the comment section whenever Germany or the German language is mentioned in the exercises. But these are easy to ignore.

What truly frustrates me is the reporting system. On Duolingo, sometimes there are multiple ways to say the same thing. For example, there are 3 ways to say ‘if’: im, lu, ilu. There are also 4 different ‘you’s, depending on gender and number. In the past and future tenses, the subject (I, you, he) is optional. Besides, how do I put this delicately…the creators aren’t exactly the best speakers of English. As a result, sometimes you are forced to write not only unnatural, but also ungrammatical sentences in English, such as ‘he is thinking to do something’. Alternatively, the course sometimes forces you to use bad translations when a better one exists, such as מבנה instead of בניין for ‘building’.

You might get marked wrong if you use a combination of these words that doesn’t exist in the system yet. In these cases, you need to report by clicking ‘my answer should be accepted’. This is meant to slowly improve over time, but as it stands, the course creators are relatively slow to respond to these reports, despite tens of users complaining in the comments over several years. That means sometimes you’ll have to remember the 2 or 3 accepted ways to translate a sentence.

As I’m writing this review, the Script Learning section has just been released for Hebrew!

I haven’t had the time to test it out, but from my experience testing the Arabic equivalent, it is a decent, focused way to practise reading letters together and recognising small differences in the letters. My only complaint is that it can get a bit too repetitive.

It is only available in the mobile app, so go ahead and try it out!

Duolingo Hebrew is a course that covers a lot of ground effectively. I love the native speaker audio and the usable real-life sentences. I only wish the kinks could be ironed out more efficiently.

That’s all for my opinion on the course. Do you want to know how I actually use Duolingo to learn? How do I structure my daily exercises? I talked about that on my livestream on the 1st anniversary of my first ever video.