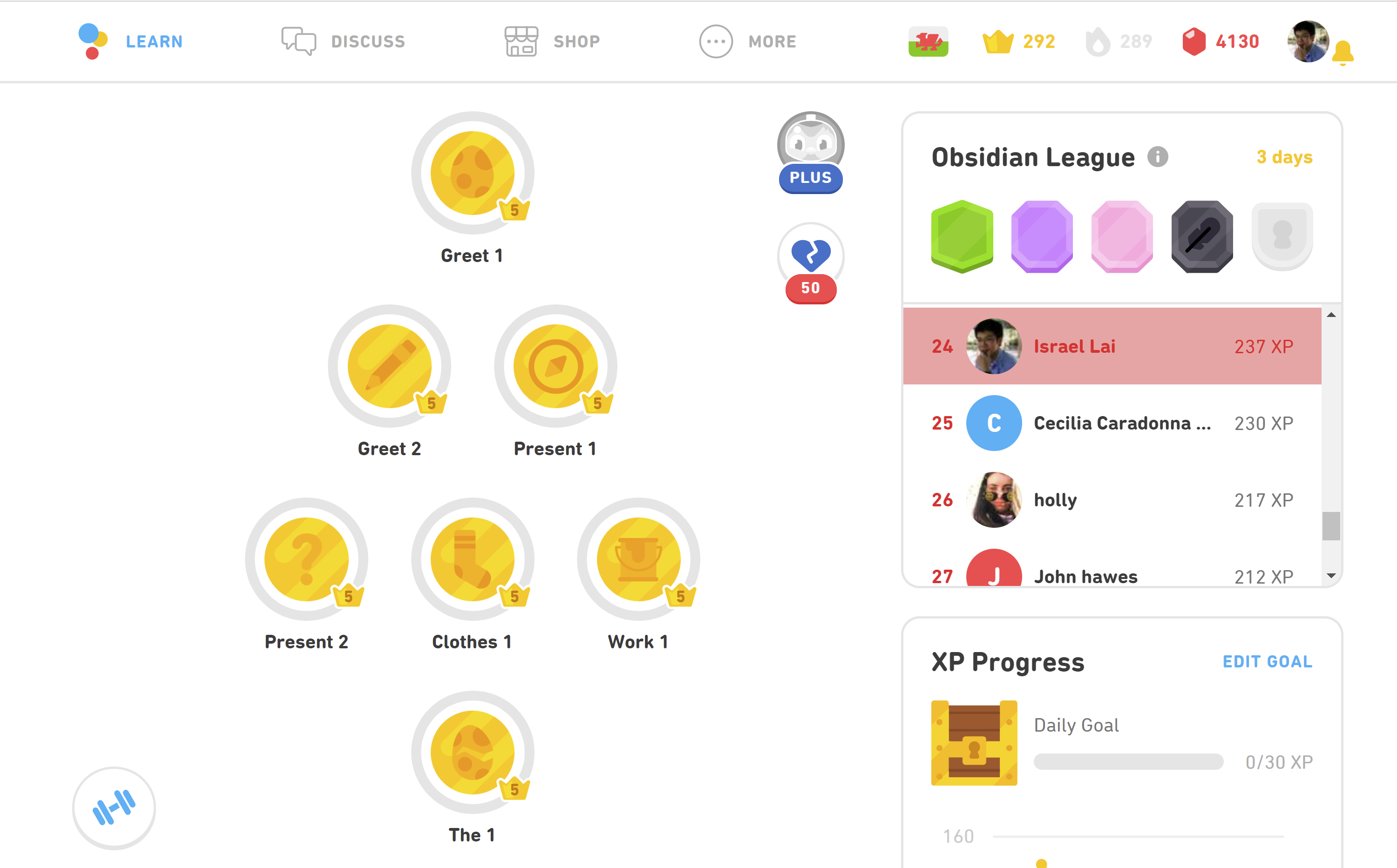 I was going to include this as a section in an article about Welsh learning resources, but my frustrations ballooned into a post of its own. I’ve written a Duolingo course review before, so hey, why not.

Part of that original article was about how you can find a few seemingly different learning resources, from books and online lessons to interactive webpages—but they’re all based on the same written textbook that is used for in-person group classes.

And what do you know, even Duolingo’s Welsh course is designed around the very same classroom curriculum. It is emphasised many times in the course notes, and it shows.

The course creators intended it this way so that Duolingo complements the publicly available Welsh classes and reinforces the materials taught in class. I assume they expect most people to learn this way, and I can appreciate the reasoning behind it.

But guess what? Duolingo was always meant to be a self-learning tool.

Every other course on Duolingo has its own design and progression. You learn through sentences and use the vocabulary and grammar in a variety of contexts. Subsequent lessons build on existing knowledge by using those words and phrases as context for new items. Your ‘strength’ in each lesson deteriorates over time so that you go back and refresh your memory. It’s not linear.

And because Duolingo Welsh is designed around a textbook curriculum, it is made like a textbook.

Each lesson comes with a large amount of reading and grammatical explanations, before you even get to start. Even though I like reading about grammar, Duolingo courses generally teach using sentences that guide you to figure it out yourself through context and only ask questions (in the forum) afterwards. These lesson notes are usually reserved for interesting cultural facts and knowledge, or a reference table you can come back to, rather than required readings.

Another problem that comes with these course notes—even though this is more a Duolingo bug—is that you can’t access them in the mobile app. If you’re on your phone, you’ll have to go to your browser, open Duolingo, and scroll to the right lesson for the notes. What if you go to the forum in your app and click the admins’ link to the course notes? Too bad! The Duolingo app tries to open the link, fails, and sends you back to the lesson tree, where you realise you’ve lost your lesson progress.

While you’re doing the lessons, you notice that the ‘sentences’ they use are different from usual Duolingo sentences. I put ‘sentences’ in quotes, because by my rough estimate, a third of the ‘sentences’ are just phrases. These include single words and phrases, like a verb (‘cleaning’), or a prepositional phrase (‘at the seaside’, ‘along’), or even a pair of singular/plural nouns (‘an egg, eggs’).

Only the remaining sentences adhere to what (I think) constitutes a good Duolingo course: demonstrating the use of these words and phrases in a variety of contexts.

Why is this course different?

Doing this course feels like filling in blanks in your weekly grammar worksheet, such as matching individual words to their translations, and writing the same sentence in all 6 verb conjugations.

I’m sure I’m boring you to death with my own repetition by now, but I am very much against this kind of grammar drills without context. I think they’re an inefficient use of your time and ineffective in forming connections in your brain.

Last but not least, my friend Samuel compared the Welsh course to Duolingo’s Scottish Gaelic course (which is excellent), and he was immediately in shock at how ‘slim’ the Welsh course is. That means that most of the time, you are confined to a linear pathway, doing one lesson after another. While I don’t think this is a problem in and of itself, it does feel an awful lot like going through chapters of a grammar book, and less like the ‘choose your adventure’ game that other Duolingo courses offer.

What I do think is a problem, though, is what’s inside those chapters (‘skills’ on Duolingo).

What do you learn?

Around half of these skills are organised not by topic, but by grammatical point. For example, there is one row of 3 skills, each focusing on the past tense of one verb. Two rows down, it’s the same thing, but for new conjugations. Before long, you get the same thing yet again, but for the future tense.

What’s worse, each lesson within each of these skills is organised by conjugation. So you get a set of 10 sentences with ‘I went’ and ‘you went’, 10 with ‘he/she went’, etc.

I think it is telling that Duolingo officially calls each bubble on the tree a ‘skill’, while the creators call it a ‘unit’. Also, that there are occasional ‘revision’ units. Just like a textbook.

This all goes back to the rationale that you are supposed to do these lessons to consolidate what you learn in class—even though the (non-linear) way progression works on Duolingo means that you probably won’t be able to do it in sync with your classes anyway.

The audio used in this course just…sucks. It’s not even a question of whether it sounds natural; instead, some sounds are just wrong. From my observation, the computer voice tends to confuse aspirated and unaspirated stops, such as turning p into b, and vice versa. This makes sense in a language where p frequently turns into b.

Despite this, I am fully aware that this is something outside the course creators’ control. The creators acknowledge this problem and repeatedly request learners not to report it.

Welsh is a small language, so there are much fewer resources dedicated to creating the tech that is needed for a good text-to-speech system. Let’s just hope it gets better in the future.

One alternative would be to use real recordings, just like the Hebrew course (they do so because Hebrew text-to-speech is even more prone to error). Of course, this would incur a lot more time and costs, and you would also lose the ability to slow down the audio—even though I wouldn’t recommend doing so anyway.

While I have no experience with Gaelic, Samuel (mentioned earlier) and I frequently share our thoughts on these respective courses with each other…along with funny sentences, of course. (More on that later.) Since they are sister languages, I thought it might make sense to compare the courses.

The difference is night and day. While both courses obviously had volunteers that poured their heart and soul into the design, it is evident that the creators of the Gaelic course took a drastically different direction.

They know and admit that the language is hard, and that’s why they’re super active in supporting learners everywhere, even creating their own Twitter account.

The Scottish Gaelic course focuses on the culture, first and foremost, rather than the language.

Each skill (or unit) focuses on an aspect of Gaelic culture and history. While the sentences are still teaching you grammar and vocabulary, they are tied together by the common theme. The interconnectedness of the lessons, perhaps even a narrative, helps you get invested in the content that is being taught.

You’re learning the structures and words in order to understand and learn about this cultural aspect, rather than drilling for the sake of drilling.

As a result, there are more skills on each row, because each one is relatively self-contained. This allows for more flexibility. For example, in Samuel’s screenshot above, at the current stage, he can freely choose between learning about history or the Highlands—whatever he feels like for the day.

The units below would be locked until I’ve finished these 3 units, which means I’m stuck in future tense hell for at least a week. Or more, because almost the entire screenshot consists of future tense lessons, plus a revision of the future tense.

Guess what comes next? The conditional tense. More grammar drills.

On the bright side, the Welsh course does go into theme-based units later, but almost at the end of the course, i.e. the ones that I haven’t done yet.

To wrap up, I don’t think this design is necessarily bad, but it goes against what Duolingo is meant to be. And more importantly for me, it means that yet another crucial resource is just a carbon copy of an existing one. When I’m looking for a variety of resources, I don’t want the same textbook presented to me in 5 different interfaces!

Good effort, but with some fundamental course design problems.

Now, I’m not saying you should choose a language over another because of Duolingo. DUH! Pick a language that’s dear to you, and look for resources from there.

Nor do I want to discourage people from creating courses like this to help Welsh learners. We need more of them, and I support every effort to promote this language, however small.

What I’m saying is that I love this language, and if you are someone who’s trying to create autodidactic resources for us (thanks in advance!), please try to avoid the shortcomings of Duolingo Welsh. I don’t think this course suffers from a lack of effort; I can see the creators hard at work in every part of the course. The problem lies in the decisions made by them that I, as someone passionate about language learning, don’t agree with.

Please learn from the things that it does right, and make something that is fun and encourages learners to focus on content and context, instead of the language itself.

You might not even be interested in Welsh, but you know about all the memes that Duolingo sentences have bestowed us with. Most notably, Duolingo Dutch.

Some people disagree with this memey direction, since many of those are sentences you’d never use. But what you can’t deny is that they are very memorable, and forming strong, colourful memories is the #1 thing you want to do in language learning.

So, is the Welsh course part of that lineage of hilarity?

Welsh Duolingo has a few characters with iconic Welsh names. (Some of them are gender-neutral and confuse me a lot.) Sadly, unlike the ‘main’ Duolingo courses, they don’t show up as cartoons. Instead, you get the usual Duolingo characters in the app’s animations, and totally unrelated, faceless characters in the sentences. Sigh, the woes of a small language.

Nevertheless, what they do do, like those cartoon characters, is go on with their daily lives. And you do learn about them.

Unfortunately, because the course is designed to be so repetitive, the things they do are quite mundane. Usually household chores and travelling around Wales.

With one exception: Owen.

Everyone who’s done any amount of Duolingo Welsh knows Owen. He’s probably a middle-aged man who is a terrible influence on everyone.

Because of his parsnips addiction.

He’s always eating parsnips or trying to get his hands on more. He would travel all around the world to get the best parsnips. And sometimes sell them too. People around him are under his bad influence.

Some might even say…these must be very special plants.

Perhaps you’re interested in learning Welsh, and are hesitating after reading this review. What I can say is that resources are scarce. If you have the time, Duolingo can help you build the habit of learning a language every day, and I would hardly call it a waste of time. (I mean, I’m still doing it every day.) So it doesn’t hurt to try it out anyway!

Do it for the parsnips.