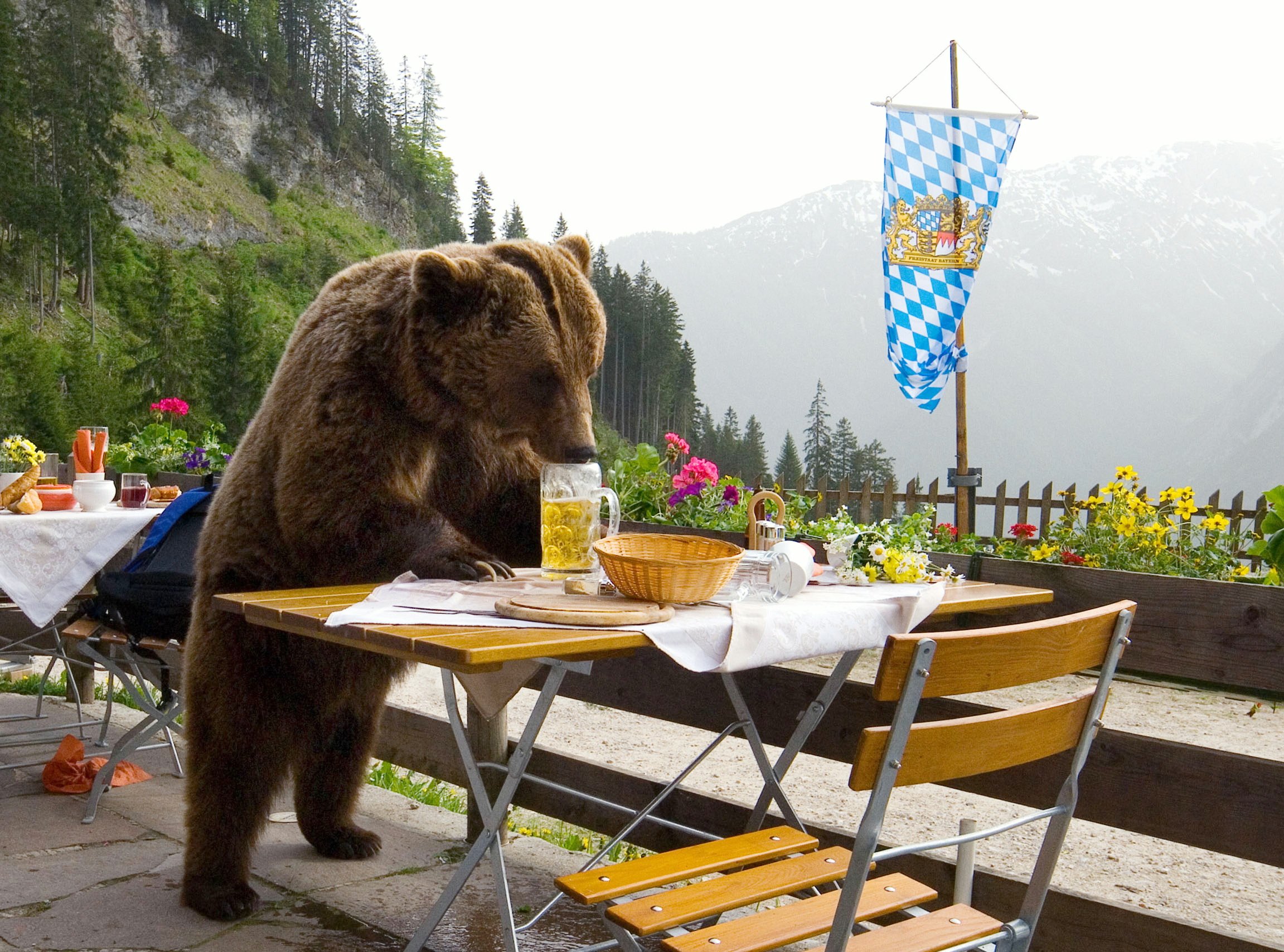 If you’ve reached that part of your German studies, you’ll be nodding in pain and frustration at this statement. If you haven’t, come back when you’ve had a glimpse of it.

Alternatively, here’s an overview: there are three kinds of declensions, depending on what is being referred to; each declension includes an ending for 4 cases, 3 genders, and 2 numbers (singular/plural).

It really seems like this was designed to mess with learners. But since German is a natural language, not the creation of a madman, there has to be a reason for this mess. Throughout history, German speakers have collectively decided that this makes sense and is necessary.

I don’t know what that reason is, but I have some guesses myself. And my own justification has been immensely helpful for me to remember these complex endings. Now, I’m going to tell you why that is, and how to remember the endings without learning by rote.

But before I go into full detail, here’s a refresher of what your teacher (or Wikipedia) might have taught you:

Strong declension means the adjective changes a lot. This usually happens when the adjective is the only thing preceding the noun, such as gute Männer ‘good men’.

Weak declension means the adjective changes relatively little. This happens after words like ‘the’ and ‘this’, such as diese guten Männer ‘these good men’.

Mixed declension is mostly the same as weak, with a bit of strong in there. This happens after words like ‘a’ (ein), ‘no’ (kein), and possessives (mein), such as meine guten Männer ‘my good men’.

Why do we need three? This brings us to the rule of thumb.

The rule of thumb

Let’s get right into it: with few exceptions,

What are determiners? They are the words that tell you which instance of the noun you’re referring to, such as ‘the’ (der/die/das etc.), ‘a’ (ein/eine etc.), and possessive pronouns (mein/unser etc.).

These words decline (change) to agree with (match) the noun’s gender, number, and case. However, they don’t always tell you all this information.

For example, mein can be either masculine or neuter. There is ambiguity.

And you know, dem Germans love their clarity and precision.

So adjective endings are there to round out the missing information and reduce (not remove) the ambiguity.

If you see it this way, these endings are actually great at helping learners figure out and remember noun genders while they’re reading.

With the right mindset, German adjective endings are a useful tool to help YOU learn noun genders, rather than an impediment! Click To Tweet

With this rule, you can basically go back to your tables, work out the endings one by one, and remember them quickly, if you are so inclined. But if you prefer to stay, I’d like to highlight several notable points.

Let’s start with the basics, shall we?

Let me first introduce my concept of ‘unmarked’ endings. This means that the adjective does not provide grammatical information. Why? Because it’s already been provided by other words surrounding it.

In a sense, it’s like the ‘default’ ending: it’s sitting there when it doesn’t have any particular responsibilities. It’s like me at work.

Bad news: there are two unmarked endings. Good news: I have an easy way to tell them apart.

One is the ‘simple’ one, -e. Why is it simple? Because it’s used only in the singular, and only in the nominative (der Mann) and accusative cases (den Mann). Those are obviously the two cases you learn first: after all, Der Bär trinkt das Bier is like lesson 3 on Duolingo.

(Note that this one coincides with the female singular ending -e, but for the sake of my explanation, I treat them as different endings.)

Everything else takes the ‘complex’ unmarked ending, -en. Again, I call it complex because it shows up when there are any kinds of complications, be it multiple items (die Bären), or annoying cases (dem Mann, des Mannes).

Now that you know the unmarked endings, take a look at the table below. It’s the weak declension; to refresh your memory, that’s when all grammatical information has been provided elsewhere, such as ‘the’ (der, das, den, dem, des in the examples above).

We’ll get back to the red one later.

Now let’s go to the marked endings, which is when the adjective takes over the responsibilities from words such as ‘the’. That’s like when your boss is absent and you can’t sit around anymore.

As a result, the ending simply looks like the definite article ‘the’. der → -er, das → -es, die → -e (both in the feminine singular and in the plural), etc.

When does this happen? When the adjective is all alone…in cases such as indefinite plural nouns (Bären, bears) or uncountable things (Bier, beer).

The strong declension fits the description of these cases: it’s most commonly used when the article isn’t there. As a result, the adjective endings are almost all marked endings.

Oh, the genitive case—rarely ever used in daily speech, but always there to cause problems.

Even Wikipedia says this often confuses learners. While everything else in the strong declension uses marked endings, the genitive singular masculine and neuter take a weird -en, instead of the expected -s. For example, sauberen Wassers ‘of clean water’.

However, this can be easily explained. This is the complex unmarked ending, which don’t provide additional information.

Because it has already been provided.

Where? In the noun itself: masculine and neuter nouns (with the exception of weak nouns) all take an -s or an -es in the genitive. That alone is very potent in telling you all you need to know. That’s why the adjective just cowardly takes the insubstantial -en.

That’s why instead of gutes Bieres, you have guten Bieres. The -s is already there; you don’t need to say it twice. GERMAN EFFICIENCY!

3. Finally: the weird ones

The weird one of the three is the mixed declension, which, as the name implies, is a mix of the two other ones. If you look at the tables on Wikipedia, you’ll notice that it’s mostly weak, but randomly takes 3 to 5 endings from the strong declension.

But there’s a very simple explanation.

Remember when I said I treat the feminine singular -e and the ‘unmarked’ -e as different endings? Here’s why.

Instead of taking endings from the strong declension, the mixed declension is mostly still unmarked, and only marked when necessary.

When is it necessary? Let’s look at the example of the possessive mein.

In the nominative, it’s mein, meine, mein. Compare that to der, die, das: the feminine one adequately tells you the gender, which is why the adjective can remain unmarked. However, there is no difference between the masculine and neuter.

This doesn’t live up to the standards of German precision now, does it?

This is exactly why you seemingly randomly add a ‘strong’ ending to the adjective. To supplement what’s missing.

If you looked at mein gut Freund, you wouldn’t be sure what the gender is. But with mein guter Freund, it’s clear as day that it’s masculine. Isn’t that great for learners?

But of course, there one more thing—the elephant in the room—that I’ve been putting off.

Thanks to my rule of thumb, you have successfully reduced all the complexities of declension into a game of logic. You have compressed all the insanity into…one exception.

Yes, there is still one exception, which is the masculine accusative singular. Like den Mann in der Bär isst den Mann (the bear eats the man, fittingly morbid).

Go back and look at the tables. You’ll notice two red boxes. In these situations, even though the other words (e.g. den, meinen) have already supplied the information (-en), the adjective does it again. The ending is marked when it should be unmarked.

The good news? This is the only exception, and it can be easily remembered with a secondary rule: the den words (den, einen, meinen, keinen etc.) always get reiterated by the adjective ending -en. (And before you ask, yes the plural dative is also den, and no it doesn’t contradict this rule.)

How to actually learn the endings

That all made a lot of sense, but how do I actually learn them? Do I do all this logical deduction, on the fly, whenever I speak German?

Obviously not. Whenever I teach my students, I tell them there are two steps to learning anything in a language:

That sounds dumb. What do I mean? Well, step 1 ‘don’t forget it’ means that you need to find a way so that you don’t have to consult your notebooks and dictionaries while using the language. It’s fine if it takes you several seconds to do the maths in your head.

For words, it can be mnemonics or memory aids. For grammar, it can be logical explanations.

Step 2 ‘make it yours’ means to incorporate it as a part of your brain. Literally, you’re building a new connection in your mind, so that it comes immediately when you need it.

I like to think of step 1 as taking a boat across a river, and step 2 as building a bridge over it.

Even though I’ve just explained the rules, I actively discourage learners from memorising rules.

Remember: the rules are just aids and tools to help you form phrases and sentences.

After you form a phrase, it’s better to remember the phrase than the rule.

For example, let’s say I decide to use der große Bär isst den kleinen Mann as one of my ‘guides’. It’s graphic enough to stick in my brain.

Next time I need to say ‘the dumb president takes the important seat’, I just think to myself: der President is grammatically identical to der Bär, so I just add the same ending to dumm. The same goes for den Sitz and den Mann. And so we have der dummer President nimmt den wichtigen Sitz.

Every time you recall something in a new language, try to connect and associate it to something else in that language, rather than an abstract rule, or something in your own language.

Eventually, you get a feel for it. Personally, whenever I use the ‘complex unmarked’ ending -en, I feel like the adjective is being ‘bent’ by the article or forced into this position. In contrast, the ‘simple unmarked’ ending -e feels like the adjective is trying not to draw attention. This kind of imagery and feeling depends completely on your brain, as long as you try to create some.

Thanks for reading! If you have a minute, do tell me in the comments below: have you struggled with German grammatical patterns like these before? How has your experience been when learning or being taught these patterns?

Now, you just need to use these patterns over and over again—in speaking, reading, listening, and writing. And again. And again.

(This article was inspired by a discussion in RiL Podcast #009.)