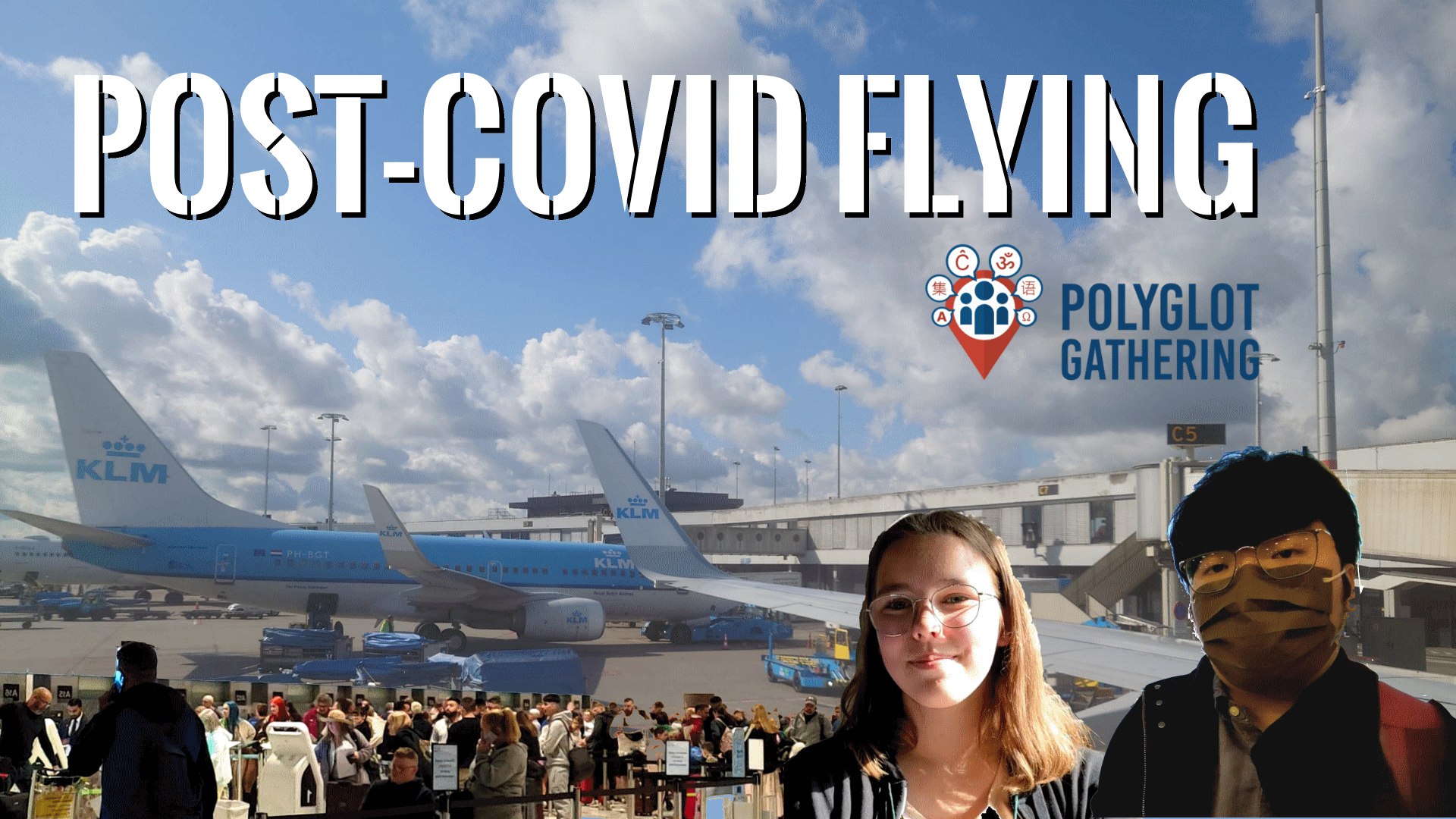 Airports in chaos, flights cancelled – will I be able to get to the Polyglot Gathering in Teresin, Poland in time?

(Since I’m posting this, obviously I did…and I arrived half a day earlier! As a result, you also get a glimpse of our local tour to the birthplace of Chopin himself!)

My performance before going to Bratislava 2019

The airports are in absolute chaos and chock full of people, all the stores were closed. I already had a bad feeling about it, they cancelled my flight, I usually run into big trouble.

I just set off and I’m already suffering. I’m on this very empty bus. Why? Because I have to get to the airport at 2 am. Here’s the story.

I’m now on my way to this year’s Polyglot Gathering. I originally booked a flight tomorrow afternoon through Amsterdam to Poland, but over the past week or so, I kept reading news saying both my home airport, Manchester, and Amsterdam airport are in absolute chaos and chock full of people. So I already had a bad feeling about it.

And then this morning, just as I feared, my flight really got cancelled. In the end, after a lot of work, I managed to change it an earlier flight, but then it’s at 6 in the morning. And in order to get in the queue early and not miss the flight, I headed out at 2 am, and didn’t manage to sleep for a single second, which is really tiring.

The funny thing is, the last time I went to the Polyglot Gathering, which is the one before the pandemic in Bratislava, in 2019, I had also just finished a music thing and took a night bus to the airport. So in a sense it’s kinda poetic, ending up in the same situation both before and after the pandemic.

Back when I read the news, they said the people queued all the way onto this bridge. But huh? Did I overworry?

Welcome to the Manchester Airport at 3 am. My check-in counter doesn’t even open in another 20 minutes. But because I’ve checked in online and I don’t have checked luggage, the moment I arrived, I headed straighter for the security. Security took a while, maybe half an hour, but afterwards, 3 hours before my flight, I’m already in the departure area.

So on the departures board, my row actually says ‘relax’. So I’m now thinking how the relax: whether I should do some reading, or try to get some sleep here.

On second thought, before I try to get some sleep, I can go for a walk and check out what this airport has to offer. Obviously there are plenty of shops – the question is how many of them are open at 3 am.

In retrospect, I was really lucky. I was originally scared to death and arrived hours in advance, but it turned out I had no problems at all. I didn’t even run into anything during security. I usually have problems there, and I noticed that the people before and after me all had hold-ups, while I got through the whole thing in a whirl. So everything was smooth…Hey there’s stuff to eat?

Wow, I’ve only been here for an hour, but the place has totally filled up with people. It really is morning already.

Lemme get more of this view before it gets bright; by then I’ll end up with poor lighting. Some of you might not about familiar with what the Polyglot Gathering is, even though I’ve mentioned it a few times on the podcast.

But it’s very simple, as the name implies. Polyglot originally means people who speak a lot of languages; now the meaning has shifted more towards people who love languages. Gathering means we all come together.

Sometimes when I explain it to people, I say it’s a conference, like the academic ones. But is it really academic? It depends on who you ask. Because it has plenty of talks and workshops on all kinds of language-related topics, but it’s not necessarily academic. I’ve seen a few that were really like academic papers, but most of it is daily life things, sharing personal experiences.

On the last online Gathering, I did a talk about the history of subtitles in Hong Kong, so I expect something along those lines.

But for me, the most important thing to do at the Gathering is meeting people and making new friends. Because there will be plenty of social activities and rooms for us to chat, to use our different languages, talk about issues related to languages, etc. So I’m really excited, because this is the first time since the pandemic where we can meet people face to face.

Good morning! We are now in Schiphol airport in Amsterdam, and I’ve just met my first friend from Polyglot Gathering 2022. So what’s your name?

Jeanine? You didn’t tell me how to pronounce it. Now I know, cos she’s Dutch. Is that the Dutch pronunciation? So is this your first time at the Gathering?

This is my first time in real life, but I’ve been to the online Gatherings too.

It’s gonna be very different, cos… I think for me, the most important part of these Gatherings is the actual gathering, like to talk to people and…Cos I’ve been to both in person and online, and it’s…I mean they try their best, but it’s harder to meet someone personally, like this, when you’re in chat rooms. So my one question for you is: what are you most excited for at this Gathering?

Have you picked your favourite talks to go to?

I’ve picked some, but there are some very hard choices.

I know, yeah. How many languages are you studying at the same time?

Okay, I feel like I should ask you: do you think that’s a good idea? But you’re doing it…

It is, it is. I’m limiting it to two, but yeah, good luck. And we’ll see more of you at the Gathering, hopefully.

I’m definitely in bad lighting now. So I just got to Amsterdam. Well I’m actually already at the gate where I’ll depart, but my flight has been delayed. But other than this delay, I found out that most of the things I was fearing didn’t even happen.

I flew from the UK, so I had to go through passport checks. I expected to queue for a long time, but it’s a normal amount of time. Yes, it was long, but to a normal degree. And then was the airport filled with people? Not really. There were a lot of people, but a normal number of them.

I remember the last time I came to Amsterdam airport was during the lockdowns. There was really not a single soul to be seen here. All the shops were closed, it was a ghost town. You couldn’t even get a sandwich.

Now it’s really lively, and I’m so happy to see this. Now I want to get a drink, but we’re getting ready for the next flight. I’ll see you all in Poland.

Since the last time I was in Poland, Poland has taken in a lot of Ukrainian refugees, so there are now a lot of signs in Ukrainian around the country. Even the trains are teaching Poles to speak some Ukrainian.

This is Warsaw West station. We just arrived in the city centre, but we’re taking the next train straight to Teresin, so we won’t even spend the time sightseeing, because everyone in exhausted and just wants to get to the hotel.

We’ve arrived in the town of Teresin. But to get to the Gathering venue, we shall now commence our half-an-hour LONG MARCH.

‘Napoleon’s Forge’. It doesn’t look like a hotel at all. What’s a ‘forge’?

It’s not something wrong with your head, (music) is being played around you.

Either the flowers are playing, or we are all crazy.

The green is really nice.

Yeah, I agree! It looks really good on camera.

To me, the air… I came from the US, the air feels really fresh too. You need to go to the country to…

Tell me about it.

I’m like wow, this is so idyllic and green.