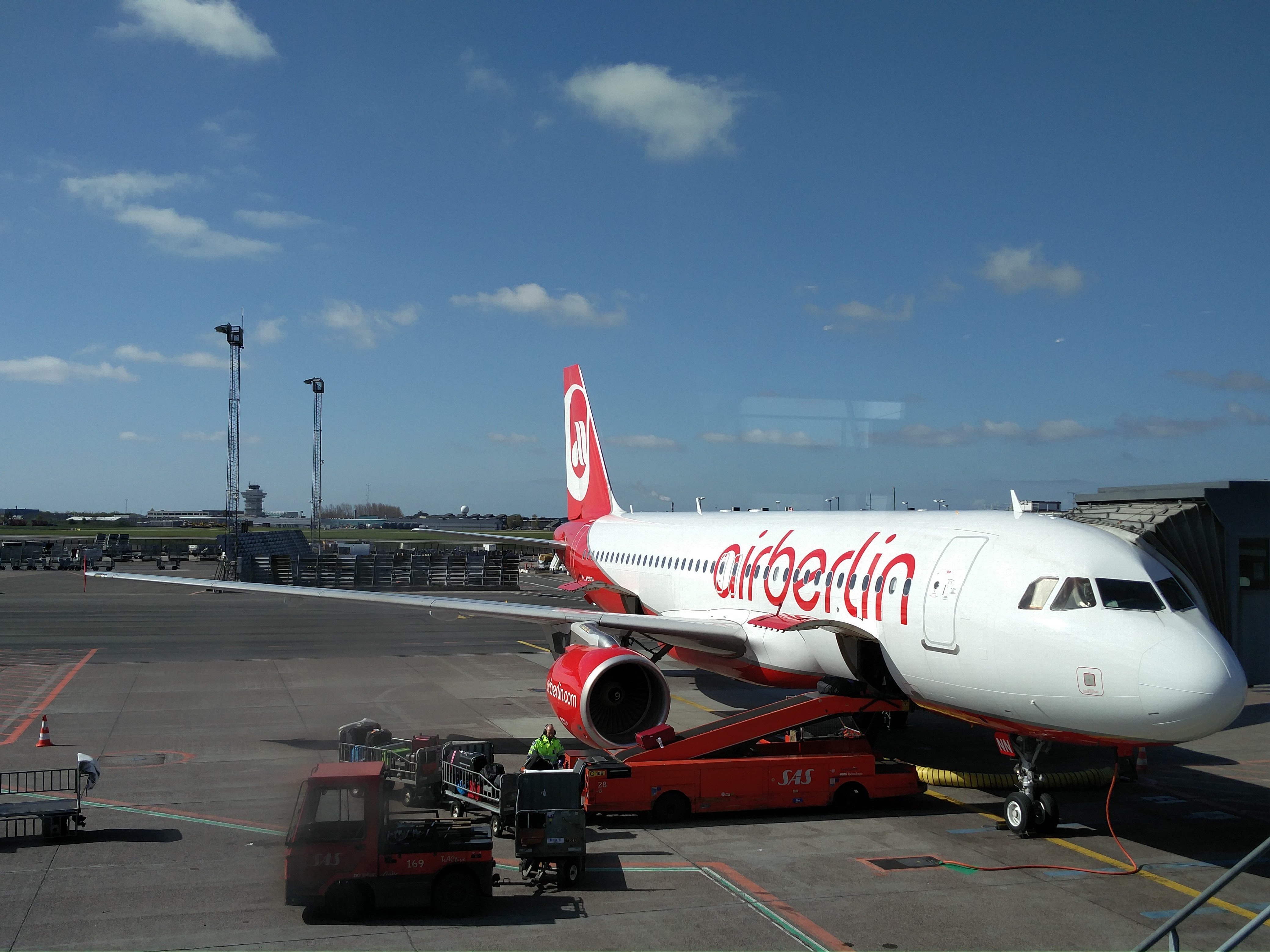 If you’re one of the two people who have been reading my blog since its inception, you might remember how it all started out – with a series of travelogues from Germany. Okay, I’ve always planned to make it predominantly a language blog, and I never managed to complete the series, but guess what, it’s #throwback today, so why not…write a language post that’s also a travelogue in Germany?

So…we’re here! YES, I just came back from Berlin to Lund, from the unforgettable annual Polyglot Gathering that I’d been looking forward to for months. Heck I’d been wanting to go since the first one, two years ago, but was only unable because I lived in Asia! So the moment I knew I was going to be an exchange student in Europe, my reaction was “yes! POLYGLOT GATHERING!”, above all. I don’t know whether I’ll ever be living in Europe again (no matter how much I want to) or whether I’ll get rich enough to afford an annual flight to Berlin, so before I departed from Lund, I firmly told myself – I had to have the most fun possible.

Flashback to last Wednesday, when I had to get up early to catch my morning flight in Copenhagen. As I stuffed my final items into my backpack (I switched from a suitcase last-minute), as I crossed the familiar Öresund, semi-voluntarily reading Der Schimmelreiter, I couldn’t stop recalling all the jealousy I’d had for the earlier participants and speculating on all the people I’d soon meet. Flying airBerlin for the first time, I arrived at an entirely unfamiliar section of the good ol’ CPH airport, too empty for me to glance around in. But once I took my seat at the far end of the plane and the Danish faded into the German, I felt as if pushed 10 months back in time, stepping onto German-speaking soil anew. In a ridiculously short time less than an hour, I was in Berlin – guess what, it was my first time at a German airport! I casually took my sole piece of luggage and unnecessarily dashed to the TXL airport bus. €2.7 – just like any other ride in Berlin – you know, Berlin prices.

After almost forgetting to validate my ticket, I scurried to an empty seat and guess who came after me – Kris Broholm himself! I’m a long time follower of his blog and podcast and (thanks to a perfect coincidence) spent an evening at his London meet-up months ago, so we kind of knew each other already, and just chattered away about Germany, the past Gatherings, and basically catching up. Also thanks to him, I didn’t have to wander around with the map I had and potentially get lost like he had before, and soon we were at the hostel (yes, a regular hostel) where the event takes place, almost right outside the Hauptbahnhof.

I dropped off my luggage – it wasn’t weightless after all – but was a bit too early for registration. It was noon, which meant perfect timing for lunch! I didn’t know anyone else I met, so I joined a randomly lady and waited ages for her friend to seek food together. As we walked back towards the enormous train station under the warm spring sun, my first challenge appeared – we chatted in French. I had never reached a level I’m satisfied with, nor had I practised intently for a long time, but the one thing we had in common – the passion for languages and more importantly, places – proved to be a reliable conversation sustainer despite the holes in my speech. And despite the three slices of pizza occupying my mouth.

So that was my first “lingua franca” in the course of the gathering. (The original lingua franca, considering this term started out referring to French.) This would happen quite often in the coming days, when we simply felt the need to daringly avoid English – as practice, as a habit, or just as a statement.

Back to the building where I’d spend the vast majority of the coming week, the pre-conference activities were beginning. It was just the arrival day, day 0, so simple games were prepared to break the ice and get our multilingual brains moving. Did I say simple? I meant nerve-wrecking! The proudly French Sylvain Lelarge led the first game, named “what is this?” (followed by the same in a ton of languages), where we’d have to discuss and figure out the purpose of 12 uncommon objects in anything but English and our native languages. We had to work with a simple label on our chests very roughly listing our various languages. (This meant people from Germany etc were at a disadvantage, or simply “broke the lingua franca”, considering how many people spoke German very well!) It wasn’t long before people got impatient and instead Sylvain revealed the solutions, in French of course. By this time the reception had started registration and had gotten really busy, so I had to get queuing! 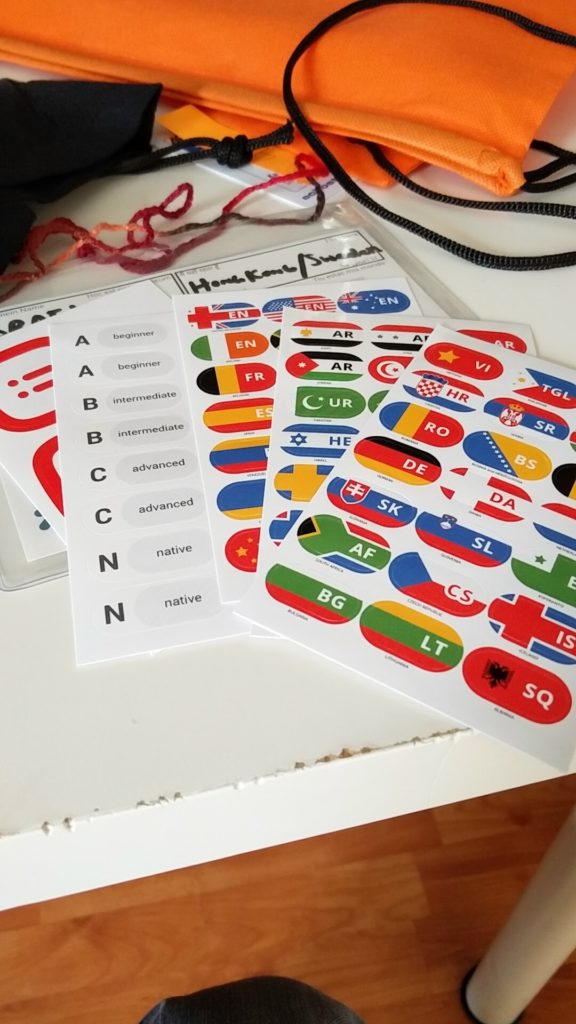 At the counter I received a welcome package and (phew) a room key. (The overly paranoid part of me had been nagging at the back of my head – what if something had gone wrong with my payment and my application hadn’t been received?) For me 440 was the best room imaginable (#musicianjokes). I couldn’t wait to start working on my personal badge: italki had prepared us neat stickers for a ton of languages, including flags for different varieties of some, suspiciously except German; I was to put them on stickers indicating the level (apparently only I did that) then onto the badge / name tag. I was a proud dad after it was done. Except the slightly off Polish flag – my OCD would beat me up for it.

Back at the event, I sat down with the lovely Lindsay and Kerstin, who were Internet acquaintances with me because….I’m a very active commenter everywhere. But at that moment it was just incredible how these “virtual people” I’d been reading from and listening to quite literally materialised in reality. Which was why I teamed up with Lindsay alongside another lovely new friend Karina for the (probably too convoluted) second game, simultaneous multilingual listening. Doesn’t it sound like your worst nightmare in school on steroids? No? Just me? OK…but simply put, the game entailed each team writing two short stories, reading them out one-to-one to the opposing team, the listener on the opponent listening to them in different languages and answering questions about them. Did I mention all of this was conducted in any mutual language but English and native languages? Duh. I wrote a story celebrating the best and weirdest of Duolingo, which involved an Icelandic banana falling in love with an Italian potato in Berlin and giving birth to a multilingual baby banana. Meanwhile Lindsay and Karina created a condensed and equally fruity version of Kafka, apparently. NAILED IT.

Finally it was dinner time. (My dining schedule fits with possibly nobody else in the world, so at every meal I’m always starving or full.) We queued for our lil’ food tickets and gradually headed down to the basement. It was not particularly well ventilated, especially in the summer-ish weather (24°C), but the meal itself wasn’t stingy: meat courses, lots of salads and always yoghurt/custard. My Swedish side just couldn’t stand the lack of coffee; rather there was water (gespritzt!) and fruit juices at a perfectly appalling temperature. That would be my meals for the coming days – I might as well start regretting booking all of them! (Around €7 each as far as I remember.) But guess what? The main point of these meals is to mingle, socialise and meet people. Everyone was open to random conversations with random people at the tables, as long as they had the badge / name tag. Haha. Personally by the end of the meal I had formed a group of young friends, which we called Hovercraft. (High five if you get the reference!) 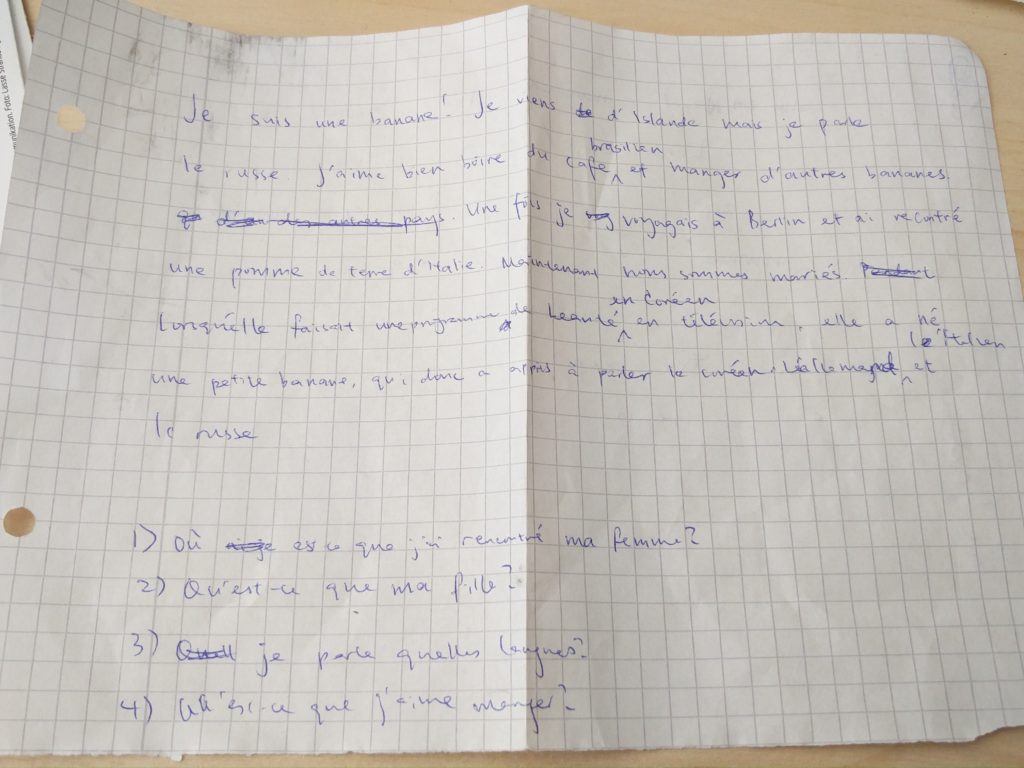 The crazy French story I came up with for the listening game.

As the final preparatory activity in the run up to the event, we had even more exciting and competitive games in the evening. The first one was forming longest possible words from a rather random series of letters provided. As experienced polyglots, most of us were already able to predict what language the answer would be in. Turns out Finnish and Italian were the best choices for this game! With the double letters in the orthography and whatnot. We Hovercrafters were pretty proud of our Finnish friend who almost won. Another game was the exactly opposite, where we tried to form the shortest possible word that includes the given 4 random letters. Guess what language was best suited? Of course, Czech.

My favourite event today, though, was still the tongue twister contest. Because this was a polyglot gathering, we were all divided into Esperantist and non-Esperantist teams (the latter outnumbering by several times). The premise was simple: one-on-one tongue twister tryouts, judged by a native speaker. We non-esperantists lost eventually, which I blame on the bigger team size because we weren’t allowed to repeat representatives. Personally I was super proud of myself, having tied the opposing Esperantist in an Esperanto tongue twister. Learning Polish does your tongue wonders guys.

People were saying one of the highlights(?) of the polyglot gathering is mingling inside the hostel during the off-hours. And I did just that: ran into a little group of Poles(!!!!!) and joined them for a long chat into the night. I would later discover that there was a good portion of Polish participants at the event. And no, I wasn’t able to conduct in-depth conversations in Polish yet. Still, I found it a good start.

That wasn’t even Day 1 of the Gathering yet, but is definitely dragging on…Sorry if this was a bit too detailed for your taste – but not unlike Kris, I want to document everything during my first experience of this event I’d been looking forward to. Plus, by that time, my bad luck was still looming, as my voice felt exhausted from all the talking and laughing…

Let’s get started with Day 1! 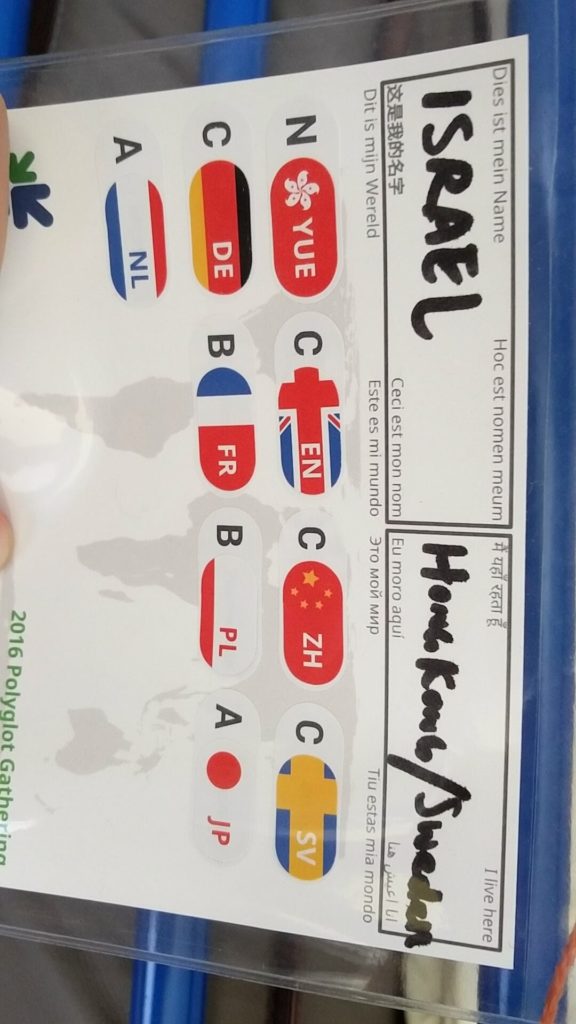