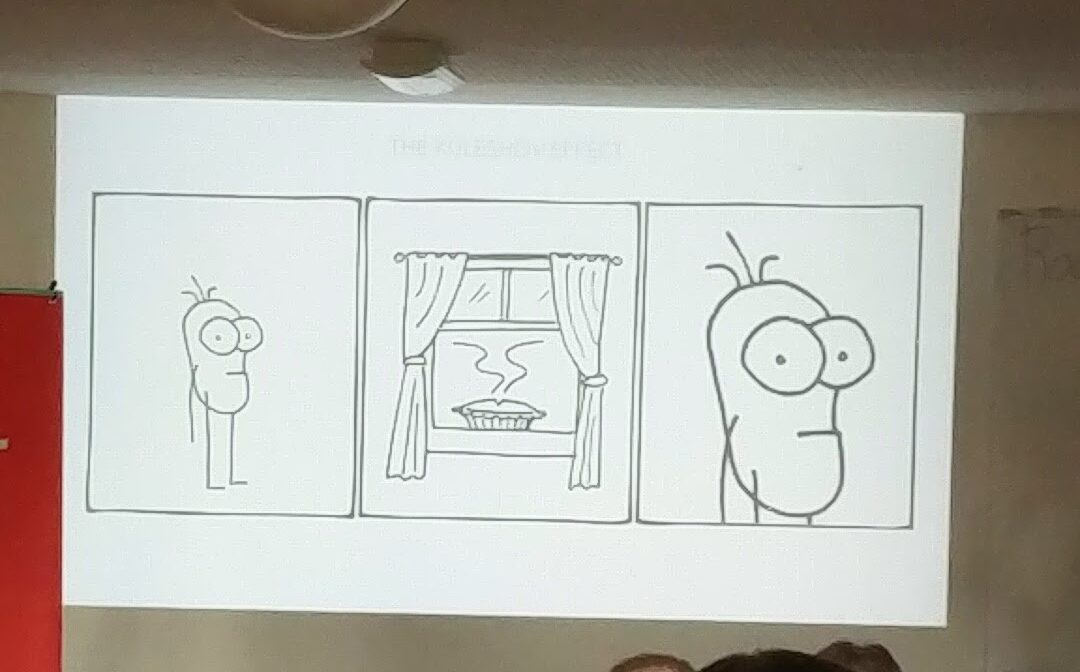 After killing the time – both mine before the actual gathering and yours for reading my previous post for Day 0 – the actual gathering was about to begin. To be fair, though, Day 0 already contained enough socialising to be considered an essential part of the event. I met tons of polyglots I knew, and even more that I didn’t. It’s pretty magical that we polyglots, or language learners – probably a weird geek among our ‘normal’ friends – get to meet so many other weirdos just to geek out together. To not feel alone in the quest for polyglottery and cross-cultural communication. To help each other spread the message that…one language is never enough.

For better or worse, I already started staying up a bit before Day 1. Thankfully, the event starts late on the first day to accommodate people just arriving that morning. At 10, we were all done with our first breakfast socialising session – complete with cornflakes, very German Schinken and very German bread, and sweet, sweet coffee – and gathered in a full room for the greeting. Indeed we really have these people to thank for this – such a huge event, along with accommodation, meals, extra activities (to be mentioned later!)…it’s a huge annual effort and probably heavy pressure. But I was soon put under pressure as well as I had to choose talks to go to. As a lingophile, virtually all of the talks captured my interest. Fun fact – I’m one of those who can never make choices. So here I’d have to choose ones that were more immediately helpful or useful, or just choose according to my new friends’ preferences or the speaker, and hope that they’d upload the video recordings soon enough. Because last year’s talks didn’t finish getting uploaded until last week. Seriously.

We kicked off with a talk on creole languages, mostly because Macau was mentioned in the talk’s title. It turned out to be about Portuguese creoles. I don’t speak Portuguese or any similar language, sadly, so I couldn’t appreciate the simplification immediately. But it was really interesting to see Portuguese words mixed into other languages’ structures, and was especially excited when I discovered the Cantonese “go-no-go” construction (for yes/no questions) in Macau’s creole.

I stayed in the room for the talk in German on intercomprehension, given by an Italian. That’s the beauty of the Polyglot Gathering, isn’t it? It was a lot of knowledge that we already knew: how people can understand similar or even less similar languages through cognates, and how teachers and learners can exploit this to speed up learning. The fun part is when someone asked a question in Dutch – fully demostrating the point of the talk. Turns out my little Polish friend had shown up towards the end to test her ‘ancient’ German skills. We proceeded to hang out at lunch. I really wish I’d worked harder on my Polish in the month leading up to this! I’d been relatively relaxed.

From this day on all my lunches were consumed in the building. And this was also the time I first felt the burden of my name and the trouble it brings: virtually everyone, upon seeing the name ‘Israel’ on my name tag, simply started speaking Hebrew to me! This tells me two things: Hebrew must be moved up my to-learn list. And from now on whenever people started gaping at my name, I had to explain that I had nothing to do with the country…

Since I had promised the speaker the night before, I headed to the talk on animal sounds in different languages, where he compares onomatopoeia in six European languages and makes us pronounce them. Then I headed to the lovely Gareth’s talk on advanced language learning, where he takes an unconventionally perfectionist approach and discusses how to break through the intermediate stage to become really good at a language, basically. It’s really my cup of tea, except when he mentioned exams…I’ve had enough exams for a lifetime in my past 18 years 😛

Sadly I had to miss a talk on Swedish, Indonesian and Esperanto (the ‘easiest’ languages) for one because I wasn’t confident in understanding Esperanto, and because of an even more attractive talk, where the cool guy behind Itchy Feet (an American living in Berlin) uses minimalistic drawing as an analogy for language learning. It was hilarious when it showed how simple his characters actually are. 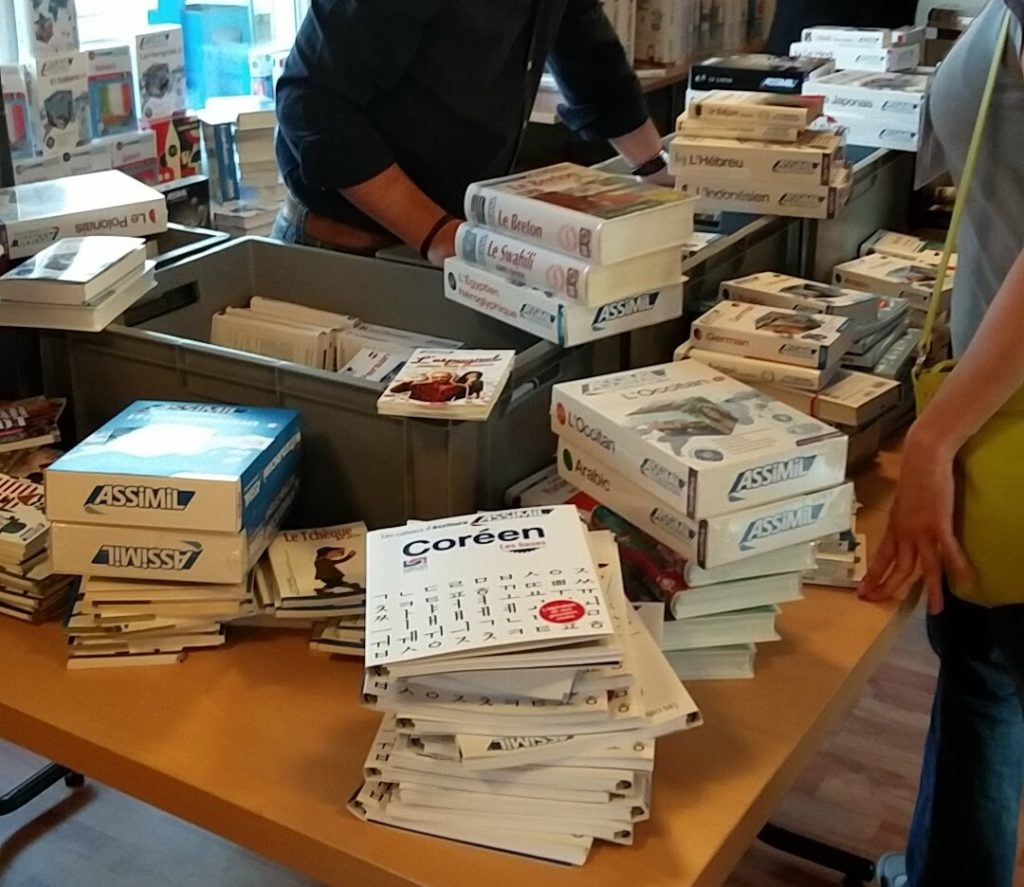 A ridiculous amount of Assimil

Unbelievably, it was already dinner time but what came next was something I had been looking forward to. The book fair! Some publishers, notably Assimil, sold their coursebooks, while other polyglots sold their own language-related books on various topics. I was really tempted to buy the former, mostly to prepare for my next language learning project, but my lack of cash helped restrain me (I didn’t know there was an ATM downstairs by then). At the same time there was an international culinary fair, where people brought and introduced food from different countries. I…well, my mom had sent me some Korean-style nori snacks along with her parcel of clothes, so I just chucked them onto an empty table and set them up as authentic Korean food, in hopes that nobody would recognise the Chinese packaging…ANYWAY. It was really fun when I ran into people wearing folk costumes just for the occasion! There was a Sami dress (I was like “waaaaaait I know that flag, don’t I?”) and the Swedish one that had showed up in last year’s talk. Funny how at this point, Sweden has become like my own country, my own home, and in this foreign country, it feels kind of heartwarming to see Swedish things and of course, speak Swedish with people. But this conference celebrates polyglottery, so how could I not go and grab a drink at the skybar in Polish?

It was late at night and people were refusing to sleep, instead hanging out at the venue for more chats. When I met someone, the practice was usually to read through each other’s badge and go through the mutual languages one by one, like Jan did with me. Indeed as Lydia puts it, this is probably the only place you’d get disappointed at ‘only’ having four languages in common. But there we were, chatting the night away, covering just about any topic, in just about any language.

The event intensifies in Day 2… 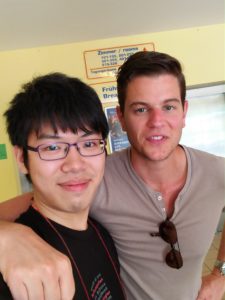