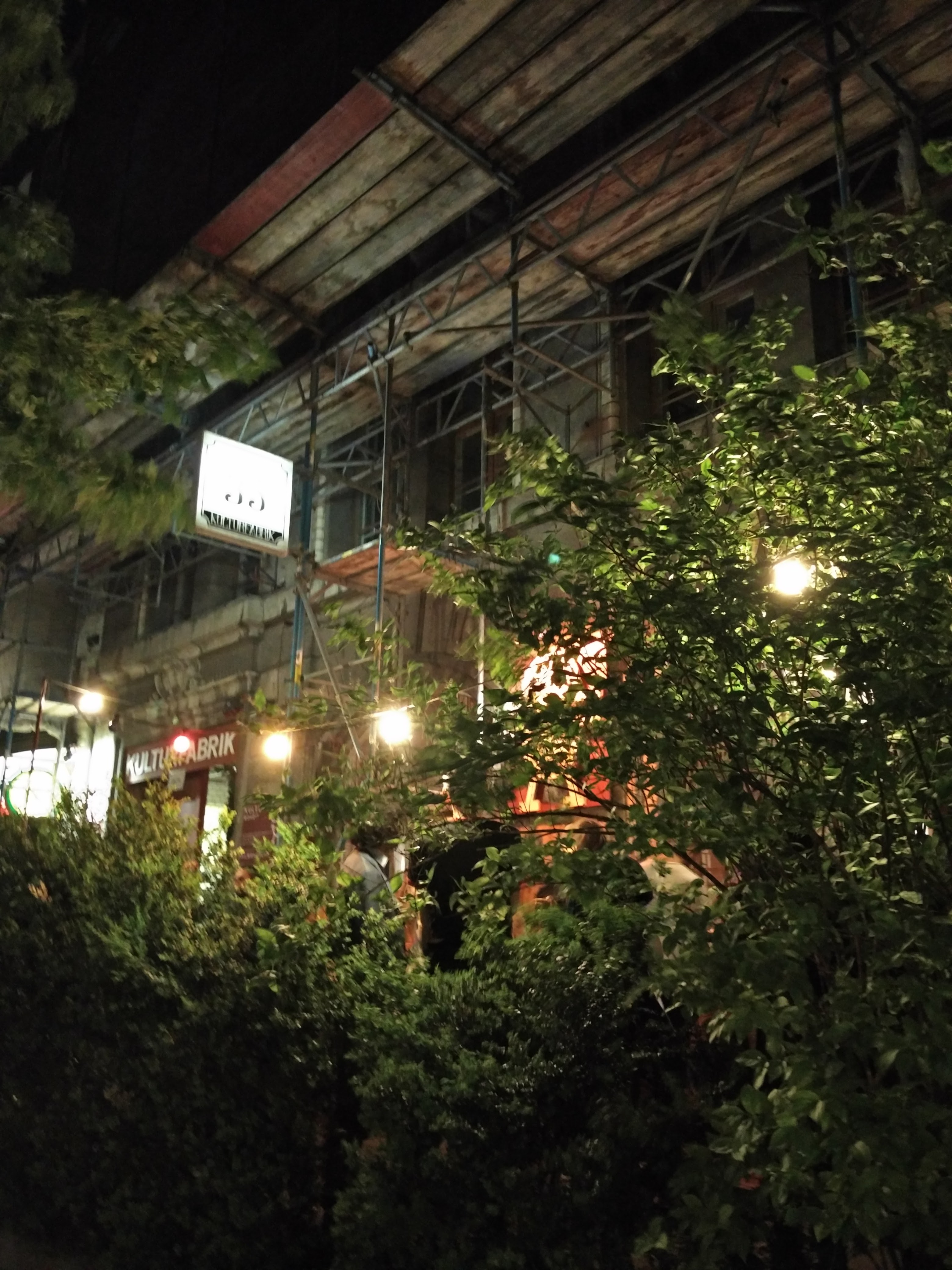 Getting into the even more fun parts of the gathering! This day there were even more multilingual talks, as well as sessions (that I skipped) called Lightning Talks, i.e. 5-minute short talks by anyone without too much preparation or visual aid. But I’m getting ahead of myself. Starting from day 2, we had to get up much earlier, at least in order not to miss anything interesting. (I do know someone who skips everything before noon though.) I was fine getting up, only to find…no, it’s the opposite: to not find my voice. Yes, I had known on day 1 that I’d caught a cold, and I’d felt a sore throat, but I thought it’d get better real soon. It didn’t. Instead, I was shocked to realise I’d lost my ability to speak, almost completely. At a polyglot gathering! It’s as if someone had put a curse on me or stolen my speaking capabilities. Jealous maybe. I’m a goddamn polyglot.

Admittedly I was a bit late to class, having enjoyed a big breakfast, downing quite some coffee, and getting, as Kerstin generously taught us, festgequatscht. I went to a curious talk about teaching multiple languages simultaneously in a class. It sounded very unconventional as usually when ‘Internet polyglots’ discuss langugage learning, they emphasise focusing on one language as a time to maximise effect. But (although I wasn’t awake enough to pay attention,) the sample videos played by the speaker seem to demonstrate quite good results from her courses. So…that’s to be judged. I’m just still regretting missing the talk on augmented reality language learning. Sounds so cool.

Then comes one of the ‘big guys’. I would have gone to the talk about a language learning revolution, especially considering how much cheers from them that I later heard through the wall, but for one I’m not that good at Dutch, plus Alex is giving a talk on the so-called need principle. That basically means you have to need a language in order to learn it – at least that’s how I can summarise it. It sounds like a big ‘duh’ to more experienced learners who’ve failed, but he did raise some questions we don’t think about that often – why are we doing this at all, if our circumstances aren’t requiring multilingualism? How should we even convince English speakers to become bilingual? Oh and I did get there to fangirl a bit over his charisma especially when he tells his childhood stories 😛 That got me rethinking though. Should I learn Spanish just because so many people speak it? Or should I wait until there exists one person whom I really want to speak to in Spanish?

I feel like I should keep this writing more concise, but this morning simply offered too many interesting talks. Then came Kerstin herself, who’s definitely very young (hey, a warm welcome to Snapchat!), talking about spending money, more specifically on tutoring. Heh, she’s definitely not enough of a cheapskate to lecture me about that (nah kidding). Yet another talk in the same room, by Tim Keeley, was whether achieving a native accent is possible at all. He debunks the popular opinion that sounding like a native speaker is impossible without being one, by giving very academic evidence and factors drawn from research. Probably the first time I was so into academia and reports? In short, for my readers: your emotional attachment and sense of belonging determines whether you can sound like a particular group. Thing is everyone in the room was expecting tips and tricks for improving their accents, and got super disappointed when Tim insisted it’s a topic for another day. 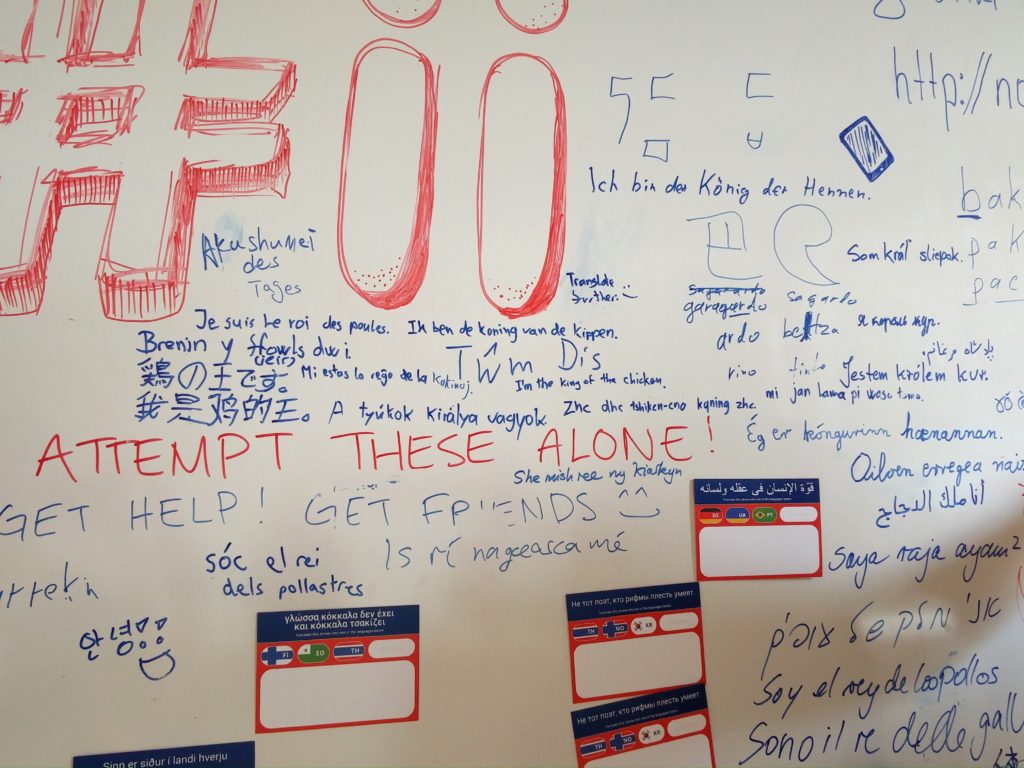 Doodling ‘I’m the chicken king’ in all the languages!

I had quite a silent lunchtime, feeling as if something was bearing down on my throat. Still, I defied, and finding nothing interesting enough after lunch, I hung out at the italki lounge. I heard it’s a new thing that italki (the official sponsor) set up this year. It’s a place where you could simply hang out, have some coffee, and doodle on the white board. They had also set up a challenge where we would, with help from a partner, translate a proverb from a (relatively obscure) language to another. I just happened to meet people from tandem, the water sponsor of the event. They were such awesome people! (I need to broaden my vocabulary.) I really enjoyed the short chat – it’s just a pity that their app is exclusive to iOS for now. But it will be on Android soon, I’m told. *insider smirk*

What I didn’t know was I was missing out on something very unique, fun and interesting. The Indonesian mini course on Sunday had been reschedule to exactly this time slot, without me noticing! All my friends had enjoyed it, and I’m sure I would have too. Anyway. I similarly skipped the introduction to Ukrainian talk – my thought process was to focus on stuff more immediately useful, and less on stuff I can either Google or catch up on YouTube. Should have known these talks are pure fun! Instead I went to Judith‘s talk on affixes. Which was also wildly interesting, as she compared how vastly different languages used affixes and other systems to expand vocabulary and meaning. I’m definitely discovering the same in Polish. It’s just a pity languages like English are overwhelmed by loan words! (At the same time in another room was the lightning talks I mentioned earlier! I later heard one of my friends gave a speech.)

Wrapping up the day was my buddy and roommate Fiel, who paid tribute to his heritage by introducing and basically advertising the Indonesian language. Well I’m definitely interested now! Not only because of the many instances of mixing in some English and the fun, rapidly developing slang – reminiscent of Cantonese (hint hint wink wink) -, not only because of his appeals to help Indonesia through learning the language and offering humanitarian support, but most importantly how he himself just seems to become 10x more funny and cheery when speaking Indonesian, on top of his already hilarious ‘American persona’. Some languages are just inherently funnier, apparently. Did I mention he demonstrated some of his spectacular guitar skills after the talk? You know, (classical) musicians have a natural tendency to gravitate towards one another 😉 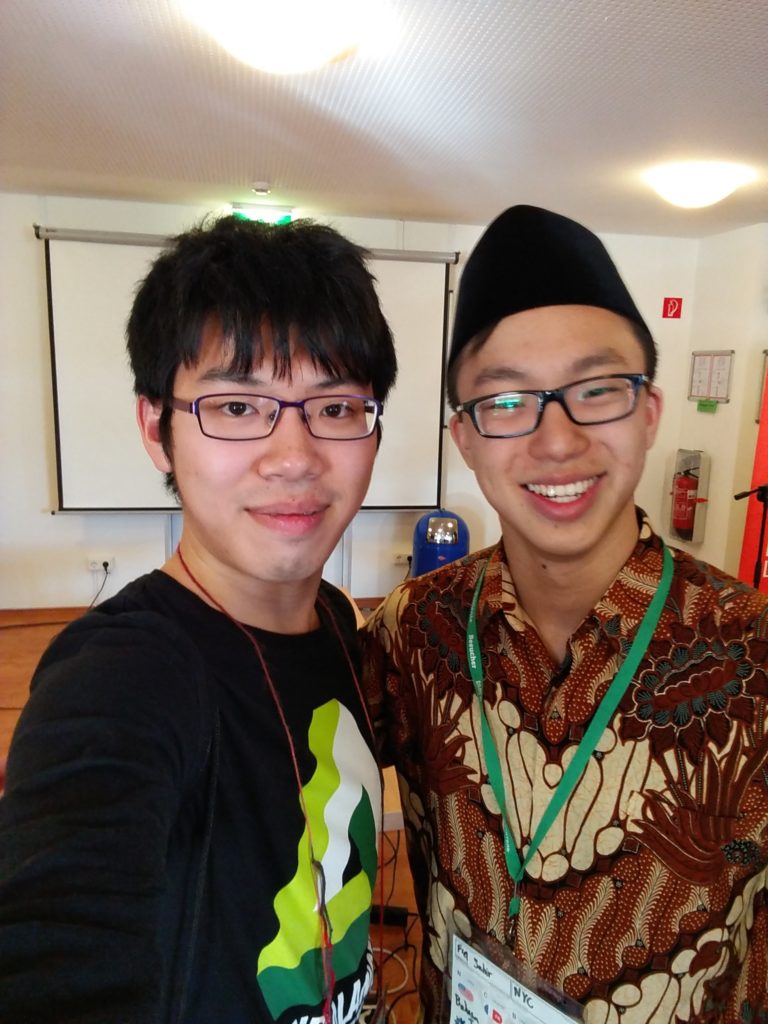 But speaking of fun, there was something even more exciting coming up. The one and only multilingual concert, given by jOmO! After dinner me and my new lady friends probably got a bit too excited and set off like an hour early, so without wanting to head back, we had to pass the time by…hanging out in a random park at the facilities for simple exercises. Pretty much it. Literally swinging and talking German for an hour. Cool, I guess. Trust me, it was fun at the time, dammit! Especially when an Aussie and an American did an Austria-Germany cultural exchange lol.

Anyway, the concert! jOmO, as expected, started with Esperanto and cycled through a shit-ton of languages. That’s the gimmick, but not the focus of the night though – it’s to have fun! Inside this very pleasant venue, I grabbed a few drinks, sat down to talk with new people (or stood), played some table football (surprise!), and of course, danced a bit. Just a little thing I learnt in Sweden. It’s the dance floor with the highest average age I’ve ever seen though, and I was super amazed by the energy and youth these polyglots all exhibited! I mean, Tim is like 55 but danced like he was 25. I’m not saying learning languages keeps you young, but…I’m saying learning languages keeps you young 😉

I did want to stay longer – even more so when my dear friend arrived after the concert – but I couldn’t keep shouting to people any longer. Number one reason to hate clubs, especially when you’re close to MUTE. I had to get back to the hostel. But it wasn’t over yet! I continued chilling out with my Polish friends, as they tried to teach a Canadian Polish pronunciation, while she tried to teach them Mandarin tones. I just sat there, amused. Well I couldn’t demonstrate any brilliant pronunciation skills now, could I? I thought so, until one of them generously, surprisingly and touchingly got me some throat lozenges! Thus began my long journey towards speaking again…

One more little thing. SCANDINAVIAN TABLE! It’s the one thing I’d been waiting to witness ever since I started learning a Scandinavian language! And there they were, a Swede, a Dane and a resident of Norway. They kept talking in their respective languages, mostly arguing (light-heartedly) about the differences in vocabulary and cultures and stuff, with hardly any language barrier. It was just a shame I had to sit there, mute, holding in all the Swedish jumping in excitement in me.

Thought of the day: today I suddenly had the idea to imagine how much effort each polyglot had put into each language. It’s huge. It’s awe-inspiring.

Bring on more of the fun on Day 3!