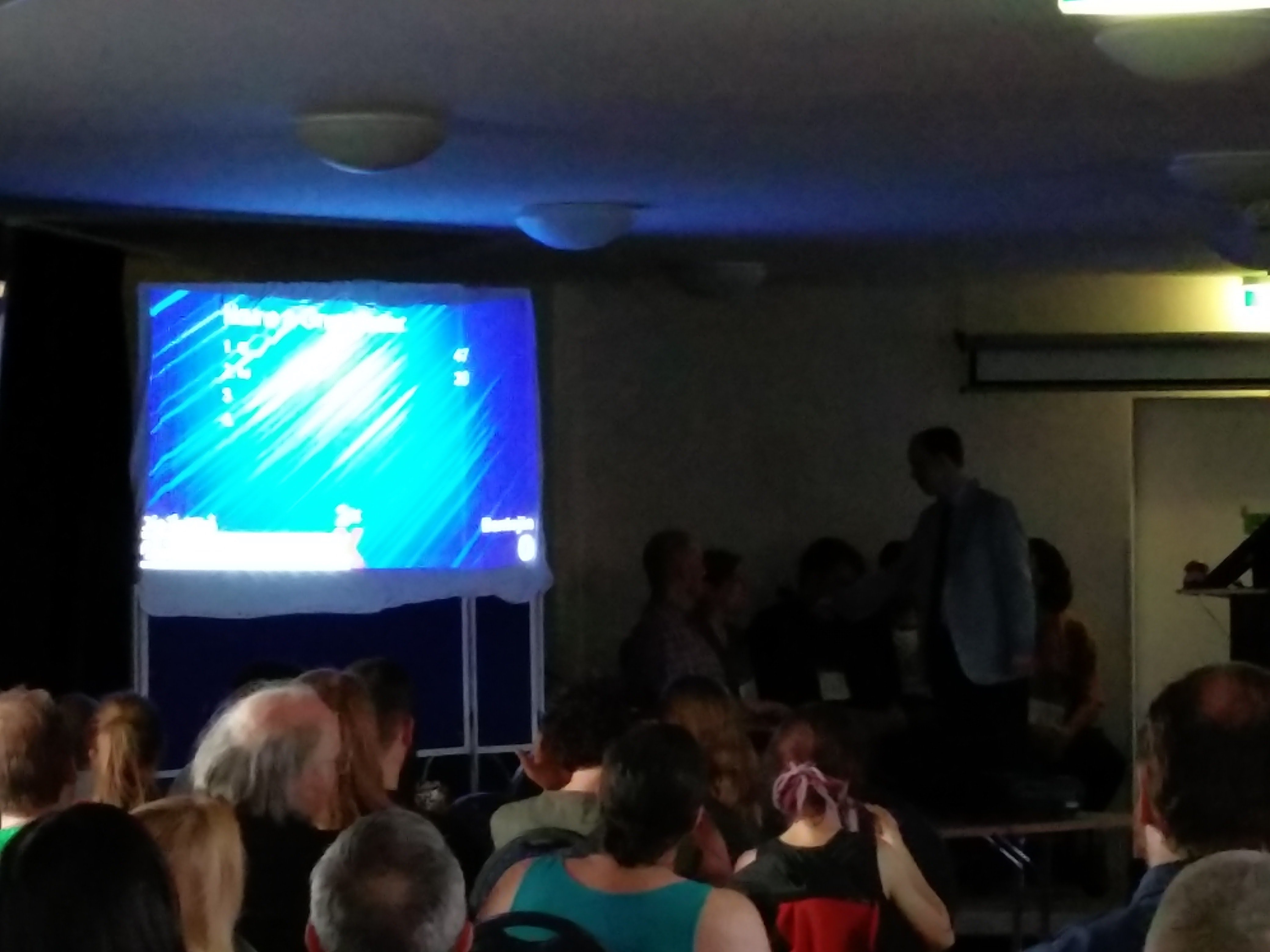 Phew! It’s taken a bit longer than expected to get the third (official) day of the event documented here! That’s mostly due to me setting off on my final journey in Europe and spending more time with my private travelogue than this. But if you’ve been reading the past two installments, the bulk of this will be similar: more talks on different topics. I’ll try to recollect what I found interesting in each talk concisely, and highlight more of the special activities unique to the day!

By the third day I’ve becoming totally hooked on the lozenges I got from my friend. Thankfully it doesn’t really hurt anymore to speak, but I still have that sexy, coarse voice with a very limited volume – I won’t be shouting at the speakers from my seat any time soon for sure. Again, it was simply impossible for me to get to the first talk in time, after all the gettting-up-procedures and a chatty breakfast. Not even when it was Richard Simcott himself’s talk on language difficulty. The thing is, while we all have high expectations on the talks by these big-name polyglots, they’ve for the most part already said all they have to say on other media, so in these talks they kind of just summarise certain advice and ideas for us. Same for this: we’ve all discussed hard and easy languages, and what makes them hard or easy, but the point is it’s our own circumstances and motivation that make a language easy or hard, in addition to the intrinsic complexity of the grammar and vocabulary.

The next talk is one I’d been looking forward to: Chinese language and dialect. Although I’ve read, listened to and taken part in many debates on this topic, and written a post or two about it, I’m still really interested to get the word out there as well as seeing other people’s take on it, especially from Michael Campbell, a proper linguist himself as well as the founder of one of my favourite methods. But…he didn’t show up. Bummer. We waited and waited, wondering all the time…and at last Vladimir Skultety, THE MAN, went up and did his own improvised talk on probably the basics of Chinese. I can’t report on that though, because instead of listening to what’s common sense to me, I opted to pay a visit to Lydia’s talk on her language mentoring philosophy. And it was worth it! I believe many of us had had this idea for long – coaching rather than teaching – and needed someone to formulate it in a talk.

Fast forward to lunch time, when we finally did the big group photo! That had been promised the previous day, but in a way that I didn’t notice, it’d been postponed. (Should have trusted my friend, who “hat immer Recht”.) It was lots of fun anyway. The sense of community among these vastly different people. Around that time I finally got some Polish practice. As you know, this language is a big challenge and before this, I don’t think I’d ever spoken it in a natural, social context. So I did! Most of the time it was just snake sounds coming out of my mouth without me actually realising what I was saying, but meh, it’s a good start (as is every start)!

Not just knowledge, but fun

The reason why I had to skip ahead are the gems after lunch. We started with the captivating introduction to Welsh – probably the only language introduction talk I went to? – by both the lovely guys Gareth and Simon. They are just as passionate about the language as they are (Britishly) funny. A large portion of the talk in a small, packed room was in Welsh: they introduced pronunciation in a flash, taught phrases and immediately fired away with extended but simple conversations. They also made people say them for repetition, though those members of the audience were visibly going through the most intensive brainwork in the entire event, just as I was. And it was definitely fun! By now I’ve forgotten everything – except the weirdest sound ever, ll 😉

The next session was a hard choice for me, split between advanced Anki and and Ellen Jovin’s “philosophy of polyglottery“, which I had no idea about but sounded close to heart. I decided to just follow the crowd to the latter and hope the other one will be online soon. To be honest this talk didn’t teach anyone anything. It was just a humorous and honest summary of the phenomenon we now call polyglottery. Polyglottery isn’t a new thing – monolingualism, in contrast, seems to have gone popular more recently than that – but this cosy community certainly is! The MSPaint-esque cartoon depicts many of us polyglots quite well, especially the younger ones. As a (recently) active member of the langblr community (*cough* follow me) this all rang a bell with many of “my people”, and I find Ellen kind of a big sister to us haha! I took the liberty of ‘pirating’ some highlights for you guys: 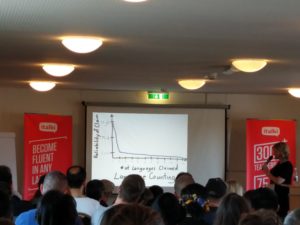 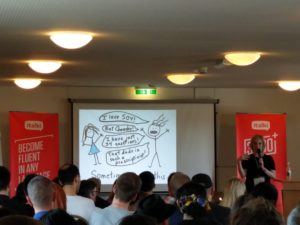 The next one was a hard one. Not hard to choose (personally) per se, but it says [M] in the booklet, which stands for multilingual…it was the talk on speaking dead languages by Cesco himself and Roberto. Yes, speaking them – as in talking in Latin to your friend right now. Other than the fact that there are spoken Latin schools and associations in many places including Hong Kong, I don’t remember much; most of my attention was directed to the languages they were speaking at the moment. As a polyglot without a strong connection to the Latin languages, I was mostly lost when they spoke Spanish and of course Latin, while my little friend beside was equally at a lost when it came to French. (Come to think of it, I was at a big disadvantage.) So we interpreted for each other, in form of ear-whispering into English or German! They went as far as changing languages mid-paragraph, so I would be like “…wait, that’s my cue!” I’d learnt that you need an actual talent to do simultaneous interpreting. Now I know it’s true.

We were done with the ‘academic’ fun for now, but let the true games begin…POLYGLOT FEUD!!! If you don’t know Family Feud (I didn’t by then), it’s basically a game where they get a question and guess survey respondents’ responses to them. Not just any answer, but answers from a survey on a specific group – and in this case, polyglots. And I loved it so much.

– including the questions too. Best place to live in? Duh, Sweden, the Netherlands, and Canada. Exactly my list. A language we never want to learn? “None”. I don’t get how people keep failing to get these answers ha! I was watching from behind the one and only Benny, who shouted at the stage in Italian when the “list of languages Benny has learned” excluded this language!

(By the way, big thanks to the 16 polyglots who thought of us above Singapore when it comes to “country that uses dollars”!)

What’s a better way to end the night than spending time at the rooftop bar with our dearest fellow polyglots? The game room was getting crowded, so I decided to walk over there instead, when Lindsay (Does Win) unfortunately had to leave the game. It was a night of great fun, welcoming Kerstin to Snapchat and alliterating and…well, just being ourselves 😉

Quote of the day: (#polyglotproblems) is there anyone who knows Linux and French?