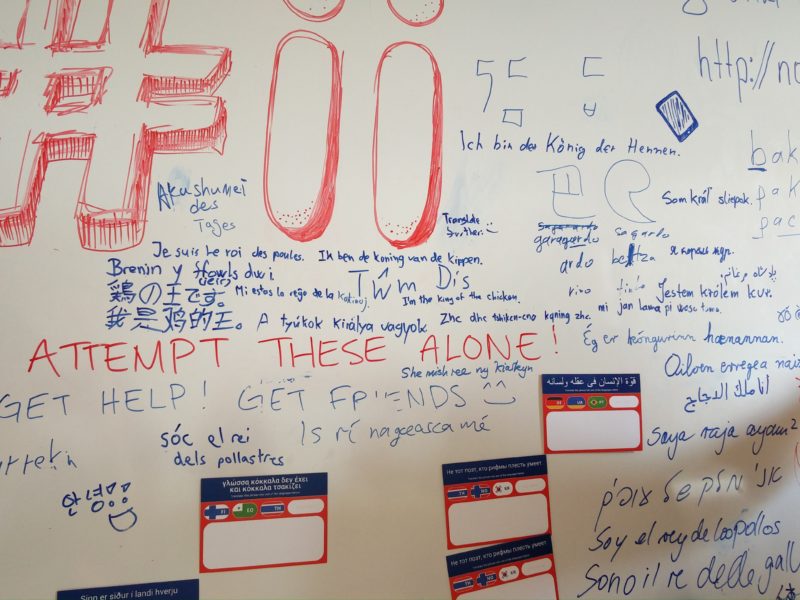 Thanks to my slow (albeit steady) publishing schedule interspersed with other topics, even the next polyglot event of the year has ended. But fear not! With my thick online face, I shall continue to document my favourite excursion of the year until I’m done! Unbelievable as it was, we’d come to the last day of the main event, and I’d come to my last chance of recovering my voice. Yes, it was still lost…I did get one good sentence out, but afterwards it got worse again. So bad that I skipped breakfast to grab a couple of lozenges at the one and only Hauptbahnhof. Hoping for the best. But let’s get back into the last day of fun! 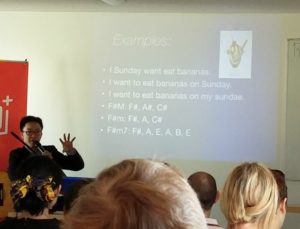 The early morning started with a fresh, inspiring talk by my new buddy / roommate Fiel Sahir on musicians techniques applied to language learning. I’d thought about this combination for a while – I even planned to write a post about it, after listening to that Actual Fluency podcast episode – but this talk managed to surprise me with even more novel ideas. In addition to apply music practice techniques to language practice, he also brought over the musician attitude and approach to polyglotism, and interesting ‘crossovers’ like using music notation in prosody/language rhythm. I was honestly impressed!

I had to skip a session afterwards because my roommate was to depart (slightly) early, and our lot had a little farewell chat. When I was back though, I didn’t miss the one of the talks I’d long been looking forward to: so-called polyglot secrets by Kris Broholm himself, from Actual Fluency, which I mentioned above. Once again, he recapitulated a lot of habits and attitudes he’d learned from the tens of polyglots on his podcast show. These are the kind of tips that when you heard them you’d be like “duh”, but otherwise they wouldn’t even come to mind. It was supposed to be his first public seminar – and I would say congratulations 🙂 Both his humour and all his insights shone through the simplistic organisation of the presentation. 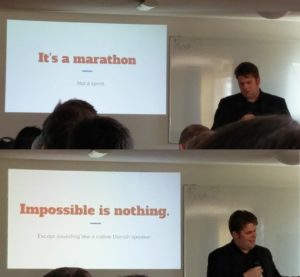 Words to live by, especially on Danish

Several of us had to skip yet another session to see Kerstin off at the station, including a very German kebab+beer lunch. Except I’d booked lunch at the event, so I saved my appetite for the hostel basement, and the knowledgeable Tim! Also in order to arrive in time for another super fun session – the stagecraft of multilingualism, by Michael Levi Harris, from The Hyperglot. (I’d have love to go to the playing with words talk, but sacrifices man, sacrifices.) As a trained, multilingual actor, he demonstrated how we (at an advanced level) can speak more convincingly – by, you guessed it, getting into character. Taking accents as an example, he shows us how his posture and voice subconsciously (or consciously but internalised?) change to suit that accent’s connotations. To me, this has always been the ‘ultimate’ goal in language learning: they say each language embodies another soul, another personality in you, yet I never felt that. I was just starting to think whether I had to create this other personality myself, before letting it germinate. Like creating a fictional character, from scratch. More thoughts on that….possibly later.

Another very informative talk followed: on successful blogging, by my buddy Olly Richards. (Again, I had to give up the Wienerisch talk…) If you happen to be one of the few who’s been following my blog since its inception, you’d know that throughout this year or so, I have been lagging behind the publishing schedule I hoped for. Multiple unfortunate hiatus only made it worse, despite already living (supposedly) a less stressed lifestyle. Olly gave us a clear checklist and guide as to how to set a goal for a blog and how to produce attractive and of course helpful content – content that the audience wants! Even more of those ‘why am I not doing this yet!!!’ moments. That’s why if you reading this, I’d really love to hear from you what you like and don’t like on my blog, and based on my background, what kind of stuff you’d like to see from me! ****

And suddenly – unbelievably – we’d come to the last talk of this year’s event. Long before Olly was done with his Q&A session, large crowds were gathering outside the room. Guess what…it was Benny Lewis coming up! Not only that, but with a “top-secret topic”. Because he’s Benny, and the lack of a title wouldn’t stop him from attracting all the audience from the lightning talks next door! And what was it about? Well here’s a good reason to complete my report so late: since then, Benny has officially announced his year-long project on the new Teach Yourself Language Hacking series. At the talk though, he revealed his work to the limited audience then, demonstrating the publishing process behind the scenes, how he made the new courses his own and most importantly (for us), why he’d disappeared from the Internet for so long. I haven’t seen the books yet, so I’m reserving my judgment for now, but I’m sure he’s doing enough publicising himself!

And finally, we’d come to the very last evening of the event. It feels kinda sad actually, after experiencing a dream come true and now having to let it go. I savoured this last meal – thankfully with planning in advance – outside the basement, rather with amazing company at the station. After dinner, an additional Assimil booth was opened; apparently people had held out during the last book fair, like I did. I thought, crap, I’m so going broke. Thankfully no…this time around they didn’t have the books (in particular, recordings) I wanted. So it’s a lose for my polyglottery but a win for my wallet! 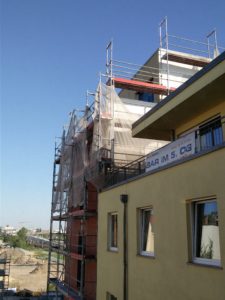 Bar in the sky with languages…

Closely following was the culture night, where, as in the previous events, polyglots came and demonstrated their abilities in any language. Most sang songs, some shared poems and some even a drama. Two of my new, young friends did an interesting speech. (Sorry, sometimes I tend to play old.) As the young souls that we are, though, we didn’t manage to sit till the end. Rather, we hung out and chatted like there’s no tomorrow at the ‘sky bar’. It wasn’t just languages: it’s astounding how much in common polyglottery brings us, and how much variety we have, despite appearing as nothing but language-crazed nerds to our ‘layman’ peers. Our unintentionally Asian gang even proceeded to the Gufujo (Esperanto: tea café <-that article mentions fika!!!) until late in the night, as we were just so unwilling to part, so reluctant to let this night, this festival end and return to our normal lives, possibly being a lone polyglot. It didn’t mattered that it was no longer a polyglot conversation, but just a cross-cultural exchange on school systems, politics or…whatever views on life. It was good.

All good things had to come to an end though, and after Fiel’s hilarious jokes and impressions started receiving complaints, it was probably time to put an end to the crazy night.