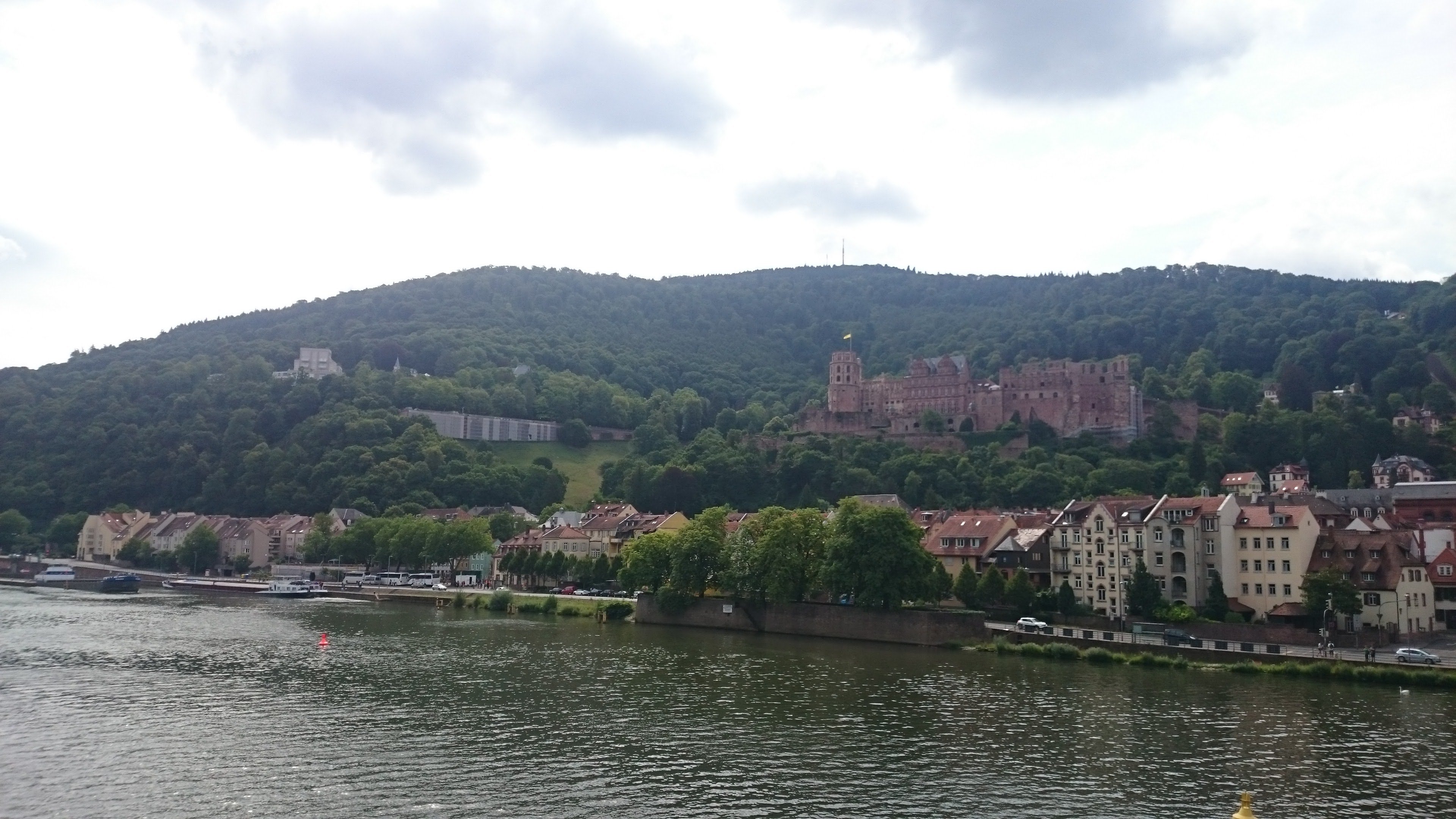 Lonely Planet’s tagline for Heidelberg is ‘surrender to your inner romantic’: this city is not only home to the oldest university in Germany, unscathed by the wars in the past century, but also a cozy and charming city at the same time – a place to fall in love (with). And I think I did. It was mildly enticed to hop off the train at Weinheim, but I didn’t know what awaited me at my destination yet, did I? Since my time there I’ve been asked many times about my favourite part of Germany, and though I couldn’t name why – everyone judges a place by their own experience – it was always this town; perhaps this is love at first sight?

Sorry I lied. It wasn’t love at first sight – when I first arrived, with just an hour or so for me to unwind from the running, I didn’t find the surroundings very exciting: it was hot, the main station didn’t look very modern, and outside were just…buildings. Quite a contrast to what you’d have heard about Heidelberg! But since I had several hours towards my meeting with my host, I decided to kill the time by taking a tour nearby. It was the first wrong decision I made, because my discoveries included several grocery stores, cafés and a night club. I did spend an hour on a huge kebab though, while skimming through my Lonely Planet like I always did. That was when I realised I was in the Weststadt district, which, in contrast to the Altstadt, had nothing in store for tourists. Eh, I thought, so I decided to grab a Heidelberg Card and design a DIY round-city tour. First, don’t get a Heidelberg Card: by paying around €13 for two days, you’re paying for bus service that you hardly need, shop discounts that you wouldn’t bother checking, and discounts at attractions that don’t make up for the cost. Second, my bus tour ended up being the second mistake I made: my choice of bus was so random that I ended up in the middle of the university area before heading back to the town centre.

But at least I killed the time and got to the meeting place in time. We chatted through the afternoon (that’s why you have to budget more time when couchsurfing), took a rest and cooked stuff in preparation for an exciting night. What was it? Well it just so happened that my short stay there coincided perfectly with a firework display over the castle, aka the Schlossbeleuchtigung! My host, her friends and I walked in the evening up the Philosopher’s Walk just nearby, up till a patch of grass halfway up the hill. I was quite excited about the fireworks and about seeing it with these new friends. And guess what? It was disappointing. To me, anyway, who has seen countless sophisticated firework displays during every festival back in Hong Kong. Still, I loved the atmosphere: people were fired up, they sang and played stuff like tangos on guitars. We even did a sleepover on a whim in the nicest house I’d ever stayed in in my life.

The next day was a nice long Sunday. I’d been told that Heidelberg isn’t worth more than one day/night, so let’s put this claim to the test! I literally didn’t start the sightseeing until afternoon, so it’d be a good idea to start with the elephant in the room: the castle, reached by simply walking down the Altstadt towards the very end. Bergbahn wagens take you uphill in no time (more on that later); indeed a round tour on the Bergbahn and entry to the castle was basically all I got out of my Heidelberg Card. I chose to go by foot though, and the secluded houses along the way almost carried me away into an imaginary fairy-tale world. Worth it! As for the castle itself though…it falls short of its surroundings in conjuring this dreamy atmosphere, the architecture looks simplistic and worn-out to me, and there wasn’t much interesting content to see either. One attraction is the Pharmacy Museum, with no extra entrance fee, which could be eye-opening or extremely boring depending on your interests; I just don’t understand why it was located there.

I was back downhill for a break at the Karlsplatz square before setting off again to get done with the other tourist spots in one go – they’re all in the same area, even the same street, anyway. Unfortunately, I didn’t realise it was a Sunday, so most of the attractions, mostly relics of the university’s past, were…well, closed. These include the Studentenkarzer (student prison) that sounds thrilling on paper. Still, it was worth taking a look at the university library and the Alte Aula (old lecture hall) just to get a feel of being a student here. Because, well, I’ll soon be in another university city!

What you should absolutely do though, is to sit on the bank of Neckar and enjoy the wind and have a nice chat while the Sun sets…that makes a true vacation, doesn’t it? I had the idea to go to a cinema, but turns out the town is pretty slow in getting new films, so I just let it go. Yup, that’s how visiting Heidelberg is like: you get to take things slowly and feel the time flow. 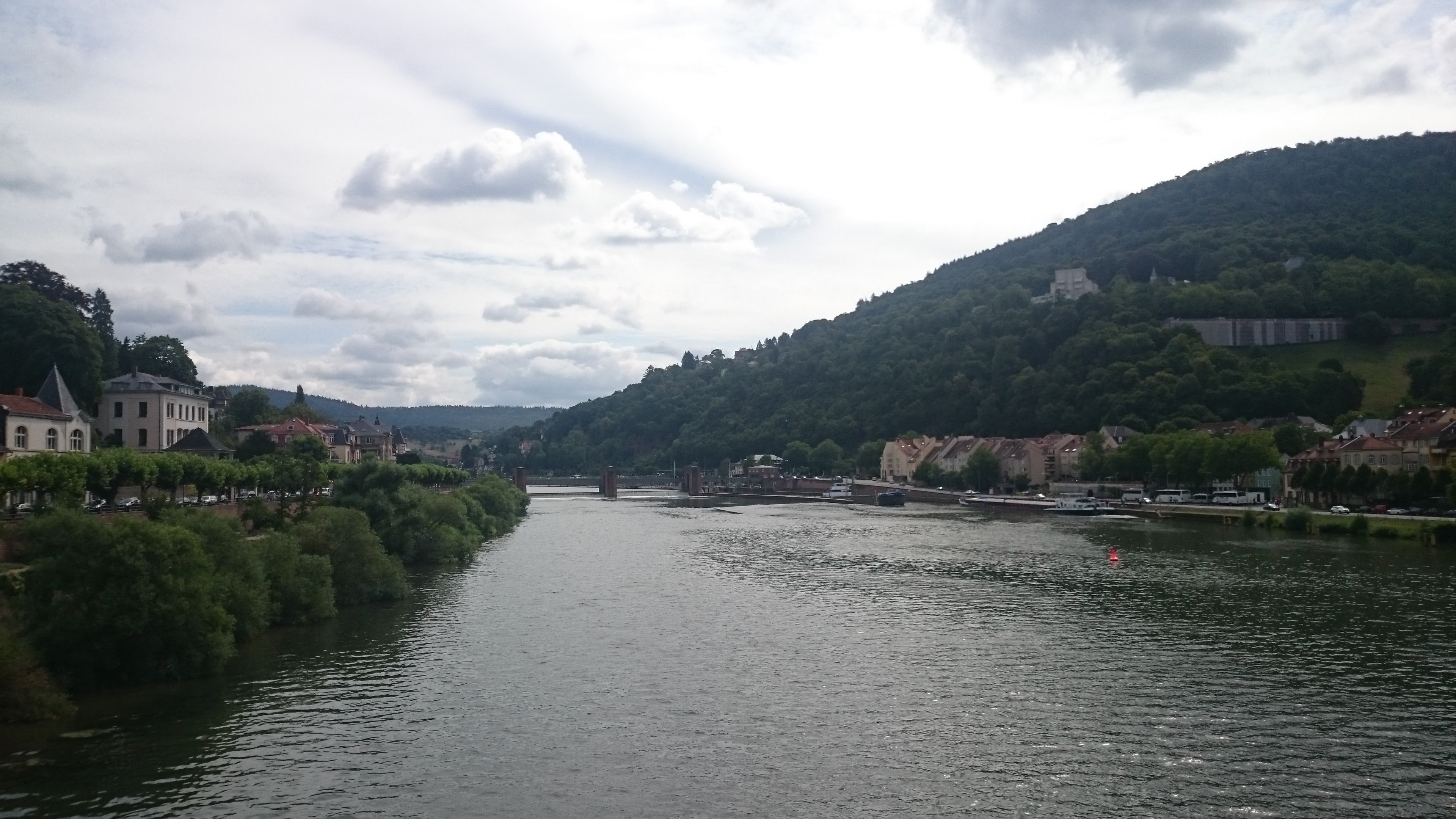 As time flew by though, I was on my own again the next morning with the company of my burdensome backpack and violin. I decided to head up the Philosophenweg once more in the daylight to actually enjoy the scenery – it was nice looking towards the Neckar from high up. Speaking of high up though, by taking the Schlangenweg (snake-path) and walking through the Altstadt, I arrived once more at the Bergbahn. Since I’d already been to the castle, I used my free ride (included in the Heidelberg card) to get past the castle station to the midpoint of the mountain, where an even steeper and paid ride on an older tram took me to the Königstuhl (king’s seat), which, despite the confusing name, refers to a high and chilly point on the mountain where you can see all of Heidelberg and beyond (e.g. Mannheim). That was where I whipped out my selfie stick for the first time (don’t judge). On the way down I joined a class of young German teens in their dumb but funny hitting games.

I was in a hurry though – it’s a bad trait that I’ve always had – to catch a train that I’d chosen, towards my next destination. I took a bus and dashed onto the train platform, only to watch it gather speed and leave…but what’s worse than missing a train? Missing two. I forgot to check on which platform the next train departed, and had to wait for yet another hour. Thankfully, my rail pass grants me great flexibility and I was safely on my way towards München/Munich on a comfortable ride without changing.

So, was it true that I didn’t need that much time for Heidelberg? My conclusion is: if you’re coming just for the tourist sights, then you could get everything done in half a day (exactly what I did). But if you’re coming for something more, be it the atmosphere or the scenery, do allow yourself more time to unwind and feel everything; and if you’re couchsurfing, well, as my host put it, you should of course always budget at least half more time to make the stay worth it. Mine was, and this ends my short stay in possibly one of my favourite cities – I’ll see you in Munich.