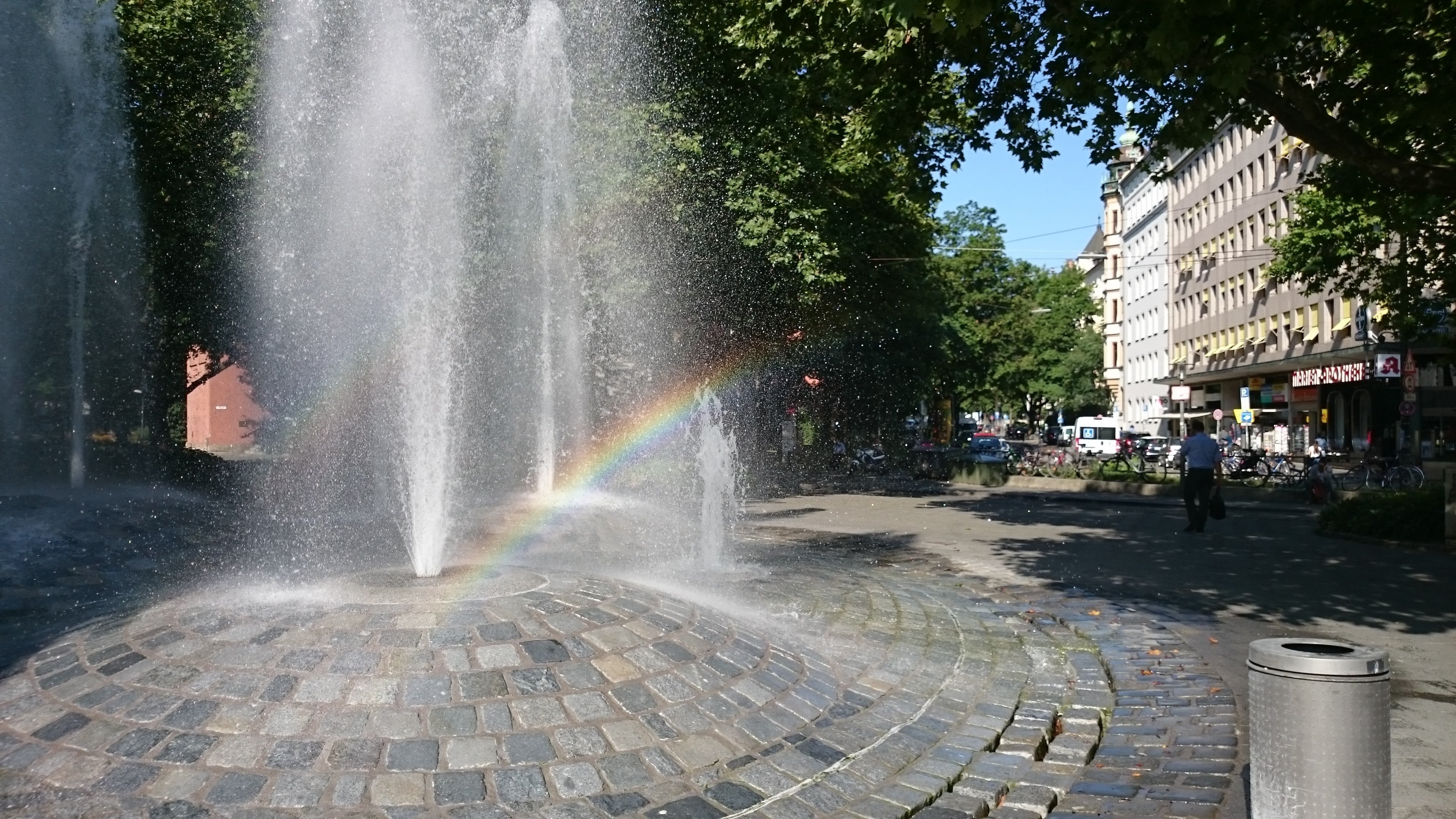 Oh Munich…it’s such an enormous city that my trip there takes two posts to recount! Catch up with what I’d done in the first 2 days here 🙂 At this point (the middle of the Munich stay) I was pretty much halfway through my 26-day journey. I still couldn’t believe this!

With my practical matters settled, I arrived by metro at the Olympiapark, where the tragic 1972 Summer Olympics were held. Except you shouldn’t expect to see much Olympics-related stuff here: there were stadiums, fields and a nice pool yes, but what you’ll be noticing is a tall observation tower of some sort. Nearby stand the BMW World & Museum if you’re interested in cars (I’m not…yet), and an aquarium if you’ve got time for that. There might even be events like performances going on around the area. If not, you could just walk around, maybe go for a swim, and enjoy the relaxing surroundings – I’m no architecture expert, but I found the generally modernistic and simplistic designs, in addition to the greenery, pretty pleasing.

After fetching my stuff from home, I was then off again to the Nymphenburg Palace. What a packed day, right? I hadn’t discovered that Munich has another palace until that day, but I glad I did. Once I arrived at that bus station, just in the vicinity of Deutsches Museum, the incredibly lengthy strip of water, extending from the pool that adorns the palace’s anterior, extends from my very front to an unknown end. The palace’s face itself though, like virtually every other attraction in Germany, was partially under reparation – quite a downer, I’d say. But inside you’d find the usual: white walls lined with extravagant statues and metaphorical paintings. The grand hall is particularly impressive, but while you walk along learning about the rooms with each their own functions and Bavaria’s other palaces, definitely don’t miss out on the famous Gallery of Beauties – 36 portraits of women from all classes whom the king at that time (a big fan of female beauty) hand-picked. Apparently his judgment differs quite a bit from mine, as I couldn’t help but find some looking like men in dresses, but who knows – go ahead and give them a look; it’s worth it. 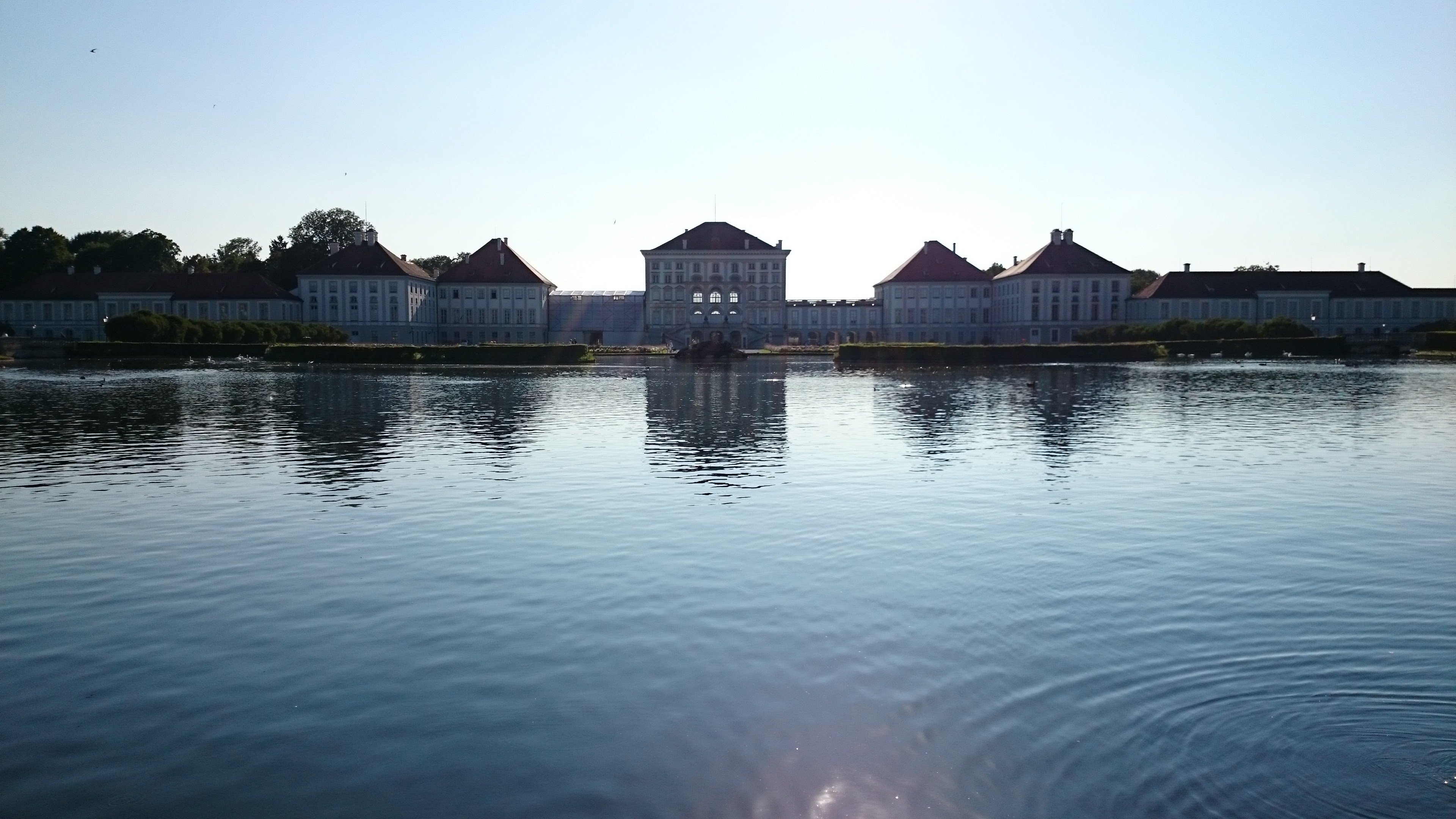 But other than that you have the palace’s garden, equally expansive as the canal is long, and said to be Münchners’ favourite destination for a morning walk.

With all these kilometres under my feet and kilograms on my back, I dragged myself to my new home – a bit in the suburb, but a fine place nonetheless.

The next day is dedicated to “mind-candies” (you know, as opposed to eye-candies). I began with Deutsches Museum, one of the many museums that are simply way too large and all-encompassing. As my host said, he went there multiple times with a year pass and still discovered novelties every time, so what could I expect? Well at least I managed to (re)educate myself about astronomy, in German, particularly because my arrival perfectly coincided with one of the two daily shows in the Planetarium. There were some sections on engineering (a lot, in fact), two on musical instruments (electronic and acoustic ones), a basement about building bridges and tunnels, etc etc, not to mention the huge planes and ships greeting you near the entrance. After a certain lengthy time I just gave up and went to see the World Cup photo exhibition (temporary) in the nearby library instead. 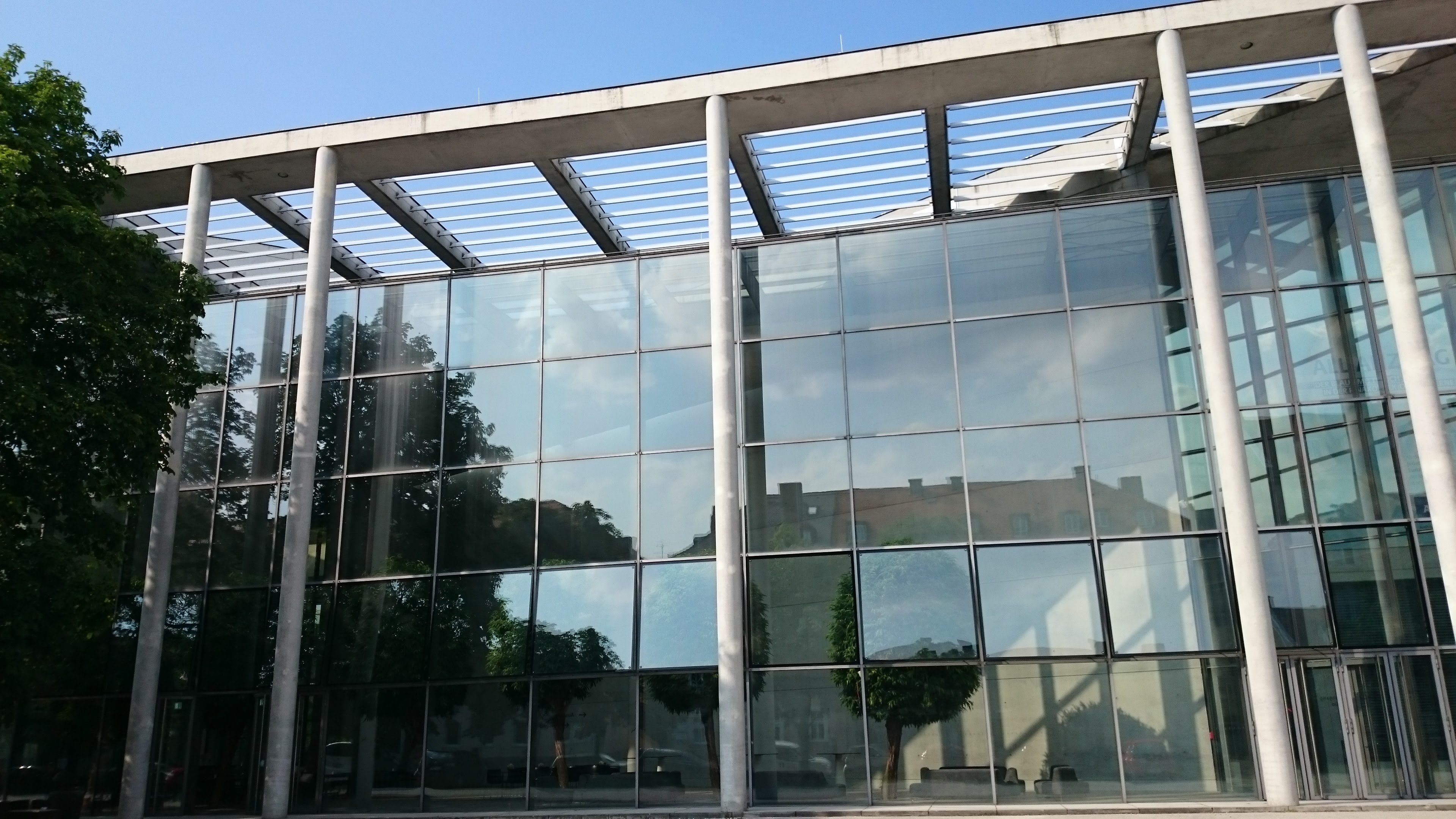 Next was the Pinakothek der Moderne, one of the three Pinakothek that I chose simply because I prefer arts that blow my mind rather than please it. And yes I walked there – something I regretted. It’s not big and cost me €7 (reduced), so I kinda regretted that as well…But as expected, you have a collection of paintings and other mind-boggling art from the past century or so, even a fun installation made from projections and drawings as a temporary exhibition.

After passing by different buildings I arrived at the Frauenkirche, the main/largest cathedral in Munich. There just happened to be a service going on, so I wasn’t allowed to take pictures and look around yet, which I greatly appreciated. (Seriously please be respectful DON’T do your sightseeing during a service! A certain…tour group kept challenging the rules, unstoppably, even sitting among the congregation to take pictures with flash using their tablets. Couldn’t believe it.) As a music student I keenly observed the chants they had, before doing my usual sightseeing after the service.

Out and about, I particularly enjoyed the sight of street musicians as they make the streets so lively – I was really impressed by certain combinations, like a cello trio and a western dulcimer (I only knew the Chinese version; I’d heard about western ones before but never seen it!). 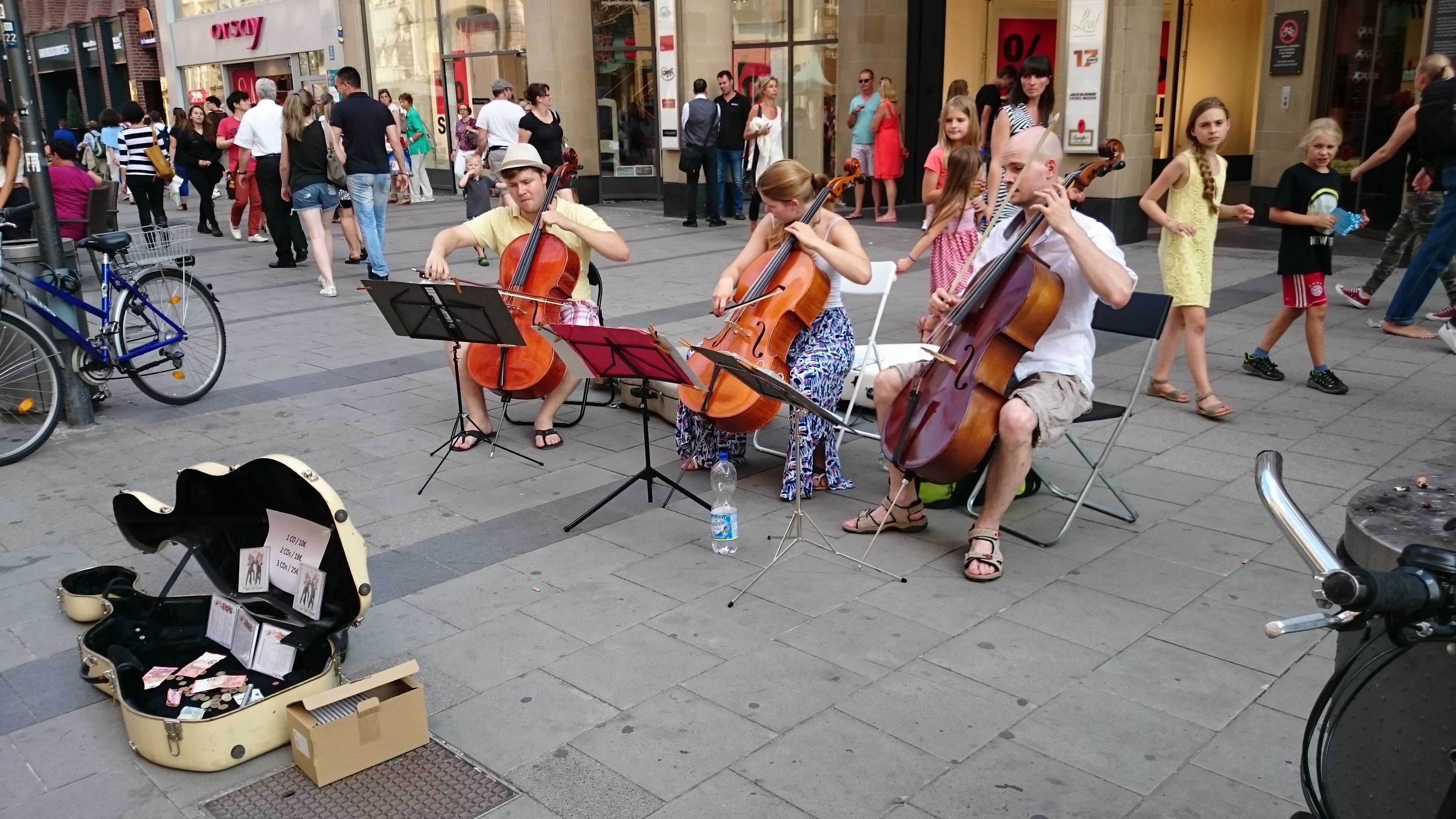 On my final day I took yet another stroll down the city centre, along spots such as the hunting/fishing museum, the city museum, the market, one of the old towers…I didn’t look at them in detail, so I’ll leave those for you to explore 🙂

But one of the important sites I’m definitely not missing out is the Hofbräuhaus! I mean, one of the world’s most well-known beer brewers just to start my day off early, right? And at this time of the day – awfully early, for me at least – the house was filled with 95% Chinese non-drinkers. Just an observation. I tried going to the Alter Hof, but couldn’t find anything interesting enough…so I headed back to the city museum, which was finally open. It had several exhibitions: the biggest was “Typically Munich”, with mostly history and some culture; an exhibition on music, with a TON of instruments, be they common or super weird, plus some actually fun DIY spots like indigenous instruments. Through a separate entrance stood yet another historical exhibition, one that Typically Munich left out: on the dark Nazi ages of the city, where Hitler came to power. It’s an informative and emotionally powerful exhibition. 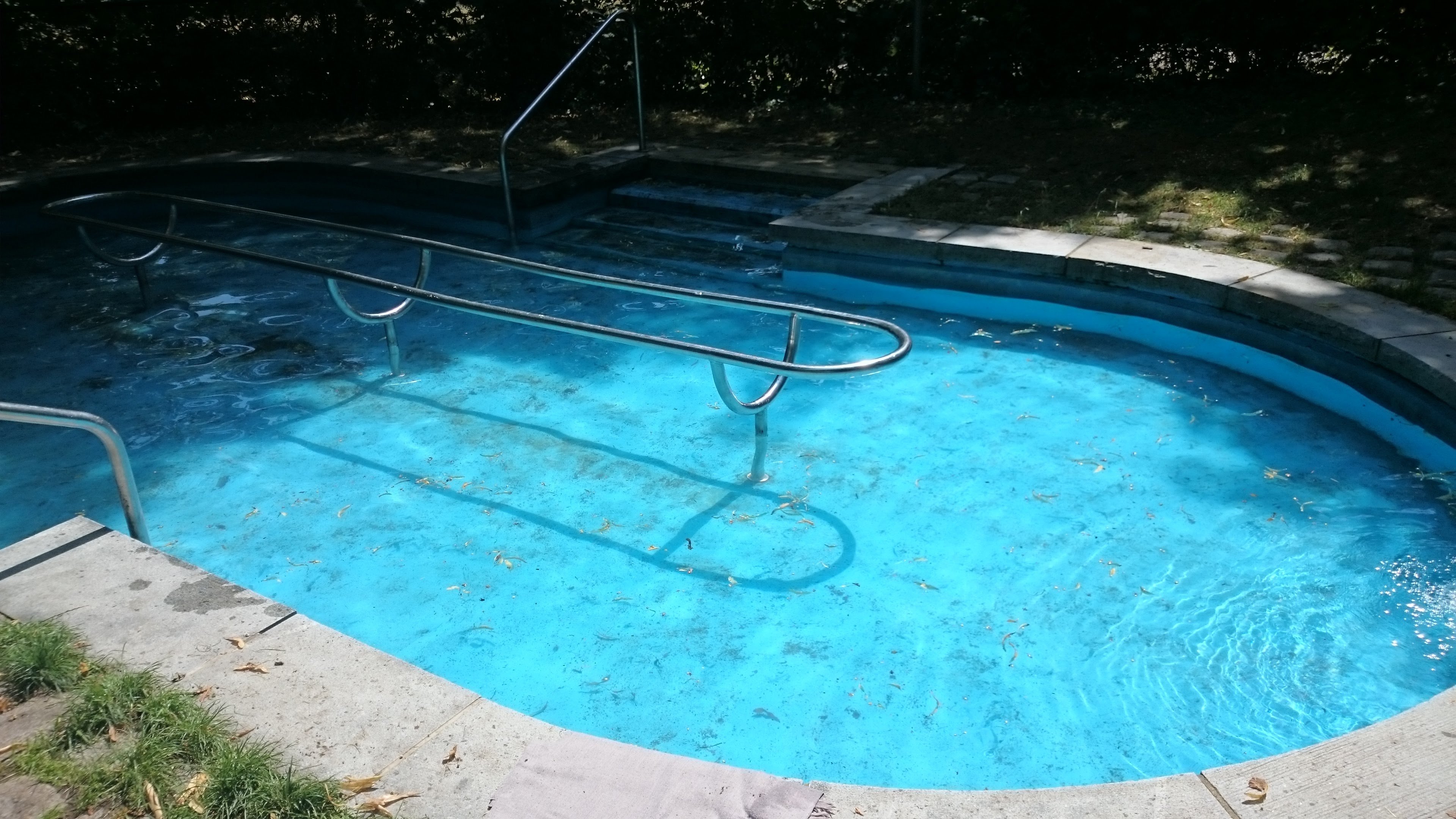 Last thing I did in Munich? A weird thing. I painstakingly (train ride plus a long, confusing walk, without Google Maps guiding) took to a so-called Kneipp-Anlage, which my host was so enthusiastic about. It’s a shallow pool with freezingly cold water (I wonder how it’s done), complete with a hand-rail to follow along in a circle. It’s said to have numerous health benefits to take a walk in it, and guess what, it’s an almost exclusively German thing! So why not?

Finally, I was back at the main station, and it was time to call this 5-day stay a wrap! Stay tuned as I continued the next half of my journey with what ended up being one of my favourite German cities (hint: or town)!