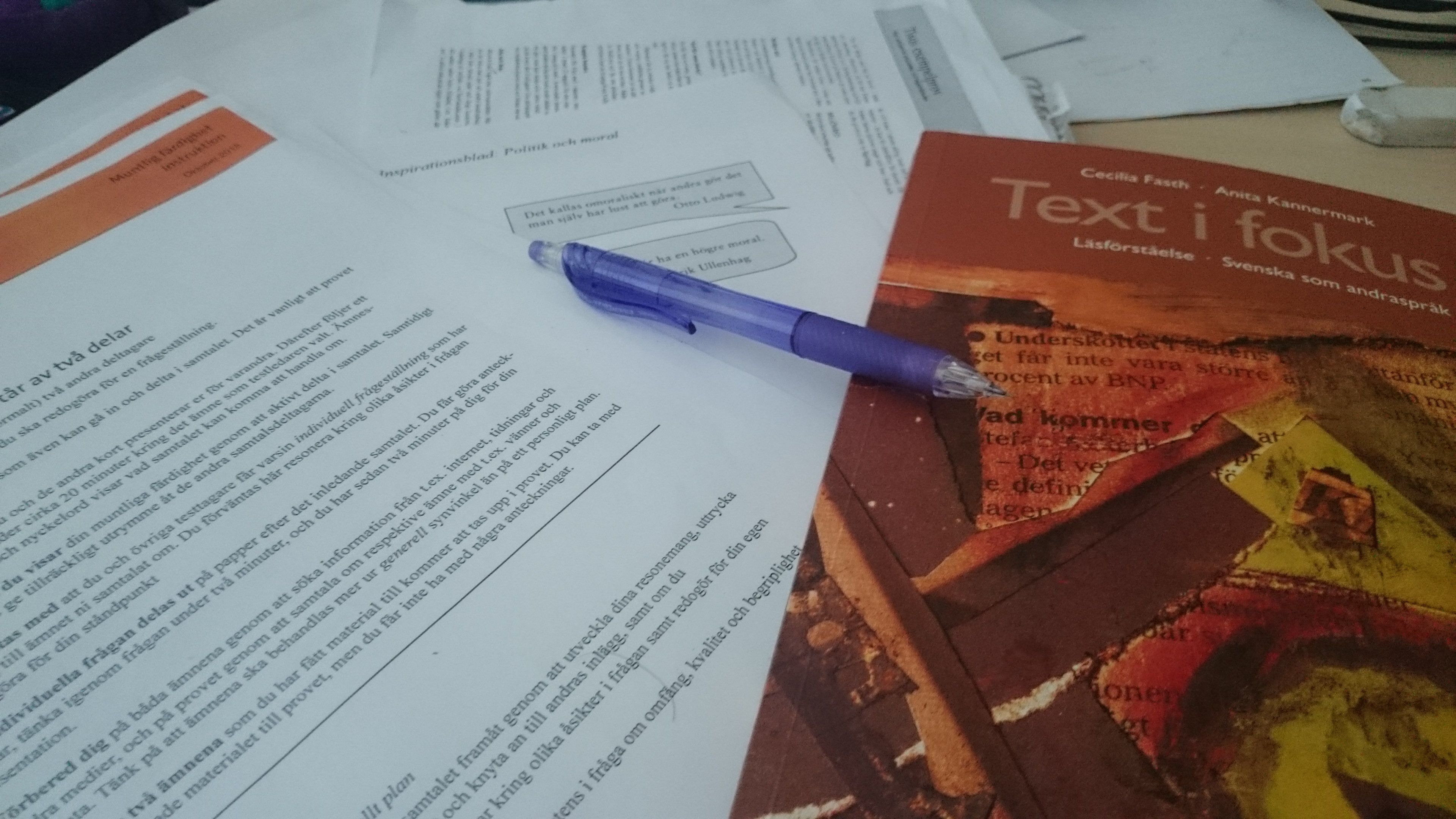 Anyway! I have JUST finished my TISUS (Test i svenska för universitets- och högskolestudier) today: I did the reading and writing tests yesterday morning and this morning I did the speaking. I kept telling myself and others that my goal was to use the exam (especially the 1600kr I spent on it) as a motivator and encouragement to learn as much as possible, so did this lack of necessity harm my progress? Maybe yes (I was still addicted to certain time-consuming activities…), but I don’t think it did. Anyhow it’s time I did I preliminary review of my performance in the exam, or a record of what I felt during the exam, as a (semi-)conclusion to my sprint challenge! Once I receive the actual results in three weeks, I will of course do another review as well, and compare them with how well I think I did.

The reading test consists of two parts: first I have to read through 5 (not very long) texts in 50 minutes and answer several questions per text, mostly multiple-choice or yes-no questions, then I have 25 minutes to read a terribly long (6 pages) text and look for a ton of short answers quickly. Of course we’re not actually expected to read through this, instead we just have to scan and look for the answers with the help of subheadings. Certain people reflected that this part was challenging to complete in time, but I was actually fine with it – I even had time left!

So how well did I do? I’d say passable. With only 10 minutes per text, I tried to my best to be as sure as possible about my answers, but still it wasn’t easy – some questions were probably intentionally ambiguous or confusing, especially if you can’t analyse the content slowly. As for reading the texts themselves, I thought I did better than expected! I got a good grasp of most of the content, and occasional unknown words could be easily inferred from context – except the final one or two texts, where words essential to the theme like urholkning did impair my ability to comprehend the message, or at least slowed me down quite a bit. Overall, I’m quite satisfied with my performance (considering my limited preparation time), even though it could have been better; I’m expecting a bare pass here. (I believe the first two or three texts as well as the “search-reading” part would save me from a fail.)

In this part of the test we got 2.5 hours to write around 400 words on tolerance. Guiding questions included how I define tolerance, whether tolerance has a limit (I have no idea how to expand this yes-no question into several paragraphs) and whether our views on tolerance are bound to change.

As I said before, the only things I’d ever written in Swedish were a short essay after the introductory course, with some preparation beforehand, and several diary entries, but no practice whatsoever (OK I did practise planning an essay but I didn’t really write it). With that in mind, I’d say I fared well writing on this complex topic, but still, that is NOT OK. I have to reflect on my self-discipline next time.

Nevertheless, as my Swedish teacher on italki suggested, I simply had to think (or plan) in English for the writing part, and it was true: it wasn’t hard to come up with ideas in Swedish after so many years of writing in Chinese and English (even though this type of topics weren’t so common in either of those exams). My only problem regarding content was that I wrote the example/argumentation inside one of the paragraphs before thinking through how I’d connect it to my point, so it ended up quite messy, not very logical and time-consuming. My scores might have taken a hit because of that. Overall, as above, it’s passable though not very satisfactory. Still, recalling my secondary school language teachers’ advice on organisation and staying on-topic, I’m quite paranoid here.

This is the scariest part of the test, because who isn’t scared of a test where you can’t take your time and think through stuff carefully? (OK at least in my hometown, most are scared of oral exams. Especially in a foreign language.) But it turned out to be rather enjoyable. We had to introduce ourselves then talk for 20 minutes about the environment, one of the two topics that we’d been given guidelines on, two weeks ahead of the exam. We then also get to respond to a related question for 2 minutes with 2 minutes of preparation. Unlike my secondary school English exam, for one these topics are more serious and socially oriented, and we are allowed to talk freely about the broad theme, instead of debating on a strict topic, and one of the examiners would chime in with a question whenever we had a dead air.

It’s usually hard to imagine oneself talking about serious topics months into learning a language, but it works just as well as small talk as long as you have the right words; and thankfully the two weeks’ time allowed me (and my teacher) to read a ton about the topics, come up with some points and familiarise myself with topic-related vocabulary. Even though hardly any of the preparation was actually used in the exam, it made me feel comfortable talking about these themes.

So how well did I do? First, I failed to talk slowly and confidently as planned, and instead babbled on with a speed that surprised myself (and of course a ton of mistakes that I quickly corrected). I wonder what the judging criteria say about self-correction. Of course my language abilities paled compared to those who have studied for years, but (hopefully) the scores are objectively given. Also, instead of in well-organised short speeches, we talked like we would chat at a café, which one may say makes the conversation more realistic and lively: I gave a genuine reaction when a candidate said air population from Shanghai affects San Francisco. As for the presentation part…it wasn’t easy. I had good points, I think, but like other candidates, I spoke a bit too fast for the 2 minutes, and the organisation was so bad that I literally bridged two parts of the speech with “now, there is another question in my task that says…” That was awful. Again, I can only hope I pass this.

I gotta say, I was really impressed with my own abilities and improvements. Two months ago I was still gaping at the Finns’ Swedish capabilities and now (I think) I’ve surpassed them. Of course I still have a long way to go, but then I have around 8 more months to perfect my Swedish, so I’m confident that this level is a very strong foundation to work on. As for the test itself, I’m expecting a bare pass in all the sections, or a fail in some – but again, my goal is not to pass it…right?…OK I’d still be very disappointed if I fail any part, since I’ll have to pay a fortune to redo it and I’ll be stuck with exchange-students-only classes next semester, but…vi får hoppas! Overall, I’d consider this “sprint challenge” a success! It gave me my first taste of intensive, independent language study; the last language I worked on was German, when I mostly only attended classes and took it slowly throughout the two years, and don’t even mention French, which was the biggest failure of my language-learning life…

Speaking of French…! My blog will be back in full swing, and I’ll be logging more of my linguistic adventures, in addition to completing my travel blog series (unless you guys hated it…you didn’t, did you?). Tonight I’ll be taking my first ever French online lesson and, in a few days, Japanese, so as to revive these dormant languages (not like they’ve been very alive before though) and kick them up a notch. (I also had to do this because my Swedish teacher is unfortunately too busy to help me complete my italki October challenge as planned…) And of course, a new project is right around the corner…stay tuned!

P.S. My English has definitely taken a hit from this…Now I tend to mix up conjugations (yes in English) and prepositions (like I’d say “I’ve studied in a long time”). Good ol’ language confusion, even with a language that I’ve been confident in for over a decade!

Disclaimer: the link to italki is an affiliated link, which means if you click it and sign up for a lesson, we’ll both get extra credits to spend 🙂 Why not?